Hamilton's engineer Bono to miss Mexico and US races 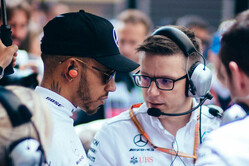 At a critical point in his season, Lewis Hamilton will be without a familiar voice in his ears this weekend, that of his long-standing engineer, Pete Bonnington.

The Briton is to miss this weekend's Mexican Grand Prix and next week's race at the Circuit of the Americas as he undergoes what Mercedes called a "a personal medical procedure".

Bonnington, who was at Brackley during its Brawn GP days has been with Hamilton since the Briton joined Mercedes in 2013, and has worked with him through his four titles with the German team.

"I've had Bono by my side my whole time here at this team, and you can hear our rapport when we're in a race," said Hamilton last year.

"Bono is fantastic at managing, because there is a lot of commotion going on on the wall and everyone is saying tell him this or tell him that, and Bono knows what to filter," said the Briton. "He is the best filter. He always comes across calm and cool and collected."