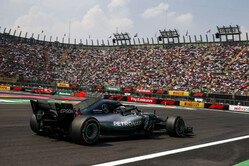 Mexico is a relatively new circuit that has its roots firmly in the past, and it contains a bit of everything. Tyres from right in the middle of Pirelli's range have been chosen for both legs of Formula 1's American double-header, with Mexico going first this year, followed by the United States a week later. So at the Autodromo Hermanos Rodriguez - named after Mexico's two most celebrated racing drivers - we'll see the C2 as the White hard, C3 as the Yellow medium, and C4 as the Red soft. Last year, Mercedes driver Lewis Hamilton won the drivers' title at the Mexican Grand Prix: this year he has another chance to seal the championship once more in Mexico City.

As has been seen at a few races already this year, most recently the last round in Japan, the 2019 tyre choice for Mexico is a step harder than its 2018 equivalent. This is because the teams tend to aim for a one-stopper, so a harder choice allows them to push hard from the start to the finish of every stint, rather than rely on pace management.

Having said that, a two-stopper was the winning strategy last year from Max Verstappen and Red Bull (at a race affected by a virtual safety car) with an ample range of tactics seen. Five of the top 10 went for a one-stopper, while there were six different strategies inside the points-paying places. Mercedes driver Valtteri Bottas sealed fifth place even with three stops.

Mexico is a mixed circuit, with a wide variety of speeds and corners. As well as two very rapid straights, there's a twisty stadium section (quite literally, as it's an old baseball stadium) where the famous Peraltada corner used to be.

Some graining was noted with last year's softer selection, which should hopefully be reduced with this year's harder compound choices. That graining was also the result of Mexico's high altitude, with the thin air generating less downforce and so causing the cars to slide more.

Despite this, both the overall lap records and race lap records were broken in Mexico last year.

Both Ferrari drivers and Mercedes driver Lewis Hamilton have chosen an identical tyre allocation for Mexico. Mercedes driver Valtteri Bottas has gone for an extra set of hards, while Red Bull has loaded up on softs.

Mario Isola: "Mexico has always been a tough and unpredictable race with a fantastic atmosphere: especially in the stadium section, where the drivers say that they can hear the fans cheering. There are some good overtaking opportunities over the course of the lap, and we've also seen a number of different strategic approaches in the past, as well as quite variable weather conditions. The altitude of Mexico City definitely affects the cars and the set-up, and this has a knock-on effect for the tyres as well. Even a high-downforce setting can feel like low downforce, so there can be a lot of sliding. Once more, we've brought a harder selection of compounds compared to last year: this should enable drivers to push the tyres to the maximum."