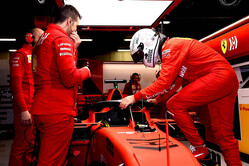 Following its final test, Pirelli confirms that it is ready to nominate its tyres for the 2020 F1 season.

The two-day test at Barcelona, was a late addition to the schedule, the Italian manufacturer having requested it after the programme originally ended last month at Paul Ricard, in order to finalise the development of its 2020 compounds.

"We had some addition requests in June and July, so it was difficult to change our development at that time," explained Mario Isola in Sochi, "and we made a proposal to have an extra test to test a new compound with a wider working range, especially on the hard levels.

"That is not possible in Paul Ricard," he continued, "and, luckily, three guys were available to run the test, so we will have one day each, Mercedes, Ferrari and Red Bull. That is a very good opportunity for us to finalise the product for next year."

Sebastian Vettel was in action yesterday (Monday) as was Alex Albon, while today Esteban Ocon was on duty for Mercedes.

Vettel completed 145 laps in total, with Albon 155 and Ocon a further 144, as Pirelli simultaneously carried out a test for F2 using 18-inch tyres.

"We carried out plenty of running with the three top teams over two days, which enabled us to collect the data that we wanted," said Isola following the conclusion of the test. "As a result, we are now in a position to nominate the 2020 specification.

"Many thanks to all three teams and drivers that took part."