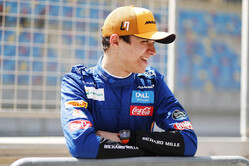 This year marks the 20th World Championship Mexican Grand Prix. All of the races have been staged at the Autodromo Hermanos Rodriguez, located in Mexico City's Magdalena Mixiuhca sports park, and have been spread over more than half a century, since the country's inaugural race in 1963.

The circuit still follows its original layout, although the infamous Peraltada final corner was bisected ahead of Formula 1 returning to Mexico in 2015, with the track now winding its way through the Foro Sol baseball stadium to end the lap.

The circuit has several unique characteristics. It has the longest run to the first corner of the season and its 2.2km/1.4-mile altitude creates interesting technical challenges, both in terms of power and downforce.

Carlos Sainz: "Jumping to sixth position in the Drivers' Championship after another strong weekend in Suzuka is encouraging and it only adds up to our motivation to keep pushing until the end of the year. It won't be easy to keep that position but I'll fight for it with everything we've got. We also took another important step in the Constructors' Championship, but we need to keep focussed.

"I'm excited to get back in the car for the Mexican Grand Prix. It's an amazing event and a challenging circuit, so I'll be making sure I give it my all and aim for good points once again. I enjoy the city a lot and how all the Mexican fans support the grand prix, so I look forward to meeting many of them over the weekend."

Lando Norris: "Mexico usually gives us great racing and should suit some of the characteristics of our car, but I know that I still need to work hard to make the most of the weekend. It's an interesting track to drive with the unique stadium section, and I'm looking forward to racing there this year after taking part in FP1 last year.

"Mexico City has a great atmosphere and the fans there are always very passionate about the race. I'm glad it will be on the calendar in 2020."

Andreas Seidl, Team Principal: "We go to Mexico with clear objectives in mind. The high altitude at the track poses an interesting challenge when setting up the car on Friday, so we'll be working hard to optimise our aero package for qualifying and the race.

"As we head into these final few races, our focus remains on maximising the opportunities to score points through work at the track and back at the factory. Our position in the Constructors' Championship is not yet secured and we must keep pushing to ensure we leave nothing to chance. It's still all to play for and I look forward to some exciting racing."