Brawn encouraged by impact of changes 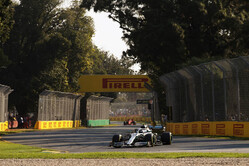 In his post-Melbourne debrief, though admitting that it remains too early to assess the full impact of the new aero regulations, F1 technical boss Ross Brawns says the initial signs of these, and the awarding of a point for fastest lap, are encouraging.

"Judging by the number of passing moves in the race; 14 this year (6 without DRS) compared to three in 2018, the initial signs are encouraging," he says, "especially as apart from the actual overtakes, we saw some thrilling battles.

"Clearly those weren't all down to the new aerodynamics," he admits, since several of them involved a struggling Antonio Giovinazzi in the Alfa Romero, "as the performance of the mid-field teams especially has closed up dramatically.

"However, several drivers said the cars felt more neutral when following another, when compared to previous years.

"Here too, the Australian track isn't the most accurate test," he admits, "so I'd prefer to wait for at least another three races before drawing any conclusions. However, the initial signs are encouraging.

"The return to awarding a point to the driver and team who set the race fastest lap livened up the closing stages of the race," he adds, "as Verstappen tried to nudge out Bottas, who had his hands on that particular prize. On lap 54, the Dutchman posted a 1.26.540, beating Bottas' time from lap 42 by 0.199s.

In terms of attendance, he revealed: "A little over 324,000 spectators turned up over the four days, which is the largest crowd here since 2005, and represents a 10% increase over last year. On Sunday, 102,000 people flocked to the track, with customary Australian enthusiasm and passion for this event.

"There were so many activities for them to enjoy in the park, not to mention on track where a huge number of cars in various categories, open and closed wheel, produced some fantastic racing to the delight of the crowd. Of course, Australia has a great motorsport tradition and that was very much on show this weekend."