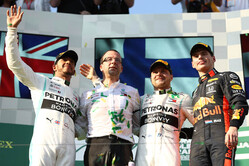 Q: Valtteri, the race of your life?
Valtteri Bottas: I think so! I don't know what just happened.

Q: What a perfect start, to get away.
VB: I don't know what to say. It was definitely my best race ever. I don't know what happened. I felt so good and everything was under control. The car was so good today. So truly enjoyable. I need to enjoy today.

Q: You made it a one-horse race. Twenty-six world championship points with the fastest lap. You were determined to have that fastest lap.
VB: Yeah, definitely. It's a new rule for this year. As I had really strong pace I wanted to go for that in the end and it's always a bit risky with worn tyres but it was worth it. I'm just so happy and I can't wait for the next race.

Q: A one-two for the team, congratulations Lewis, second place, but maybe a bit of a frustrating day for you?
Lewis Hamilton: No I's been a good weekend for the team, so I have to be happy for everyone and a really fantastic job from everyone. Valtteri drove an incredible race today, so he truly deserved it. We've just got some work to do. Still, it's a great, great start to the year, more than we could have hoped as a team.

Q: Max launched an attack on you at the end. Did you have it covered?
LH: Yeah, no problem at all.

Q: Any idea where the pace may have gone to?
LH: I do have some ideas, but I'll wait until I sit with my engineers to go over it. Naturally, position at the start was a little bit frustrating, especially when you have a good weekend up to that point but that's how the game goes and I'll just train and work hard to try and improve the next time.

Podium place for Max Verstappen. You had an interesting afternoon.
Max Verstappen: Yeah, I had to overtake Seb to get onto the podium, which is not easy around here, so I was happy to pull that move off, and also challenging Lewis for second, so, yeah, pretty pleased with that.

You had the Ferraris covered. You had a little trip across the grass, probably took you back from behind Lewis. But you were still coming at him.
MV: Yeah, it was unfortunate but I don't think it would have changed the end result.

So, reasonably happy with today?
MV: Of course. To start the season on the podium, challenging the Mercedes car ahead, I think that's a very positive start for us. Also a big well done to the team, after the difficult Friday we had. And also big thanks to Honda, also their first podium in the V6 era, so very happy for them.

Q: Well Valtteri you said on the podium that you had porridge for breakfast but was there any indication in practice that you were going to be able to unlock that sort of performance from the car?
VB: Well, first of all, as a team, in practice we saw that we were strong, both in short runs and long runs, but obviously it's impossible to draw a proper conclusion but we saw the raw pace yesterday in qualifying, as a team, with a good margin to Ferrari, and today race pace was strong - much stronger than we expected coming into this weekend. That's obviously good news. It shows that we have definitely done all the right things between the testing in terms of direction with the car. Also, for myself, it was definitely the best race I've had in my life. Obviously, the key thing for me was the race start, to get to the lead and then being at the front I could show strong pace and I could pull a gap. I think in the first stop I could also... I stopped a bit later so I was a good tyre in the end. Just the car was feeling so good today, it was truly enjoyable.

Q: Well, many congratulations. Lewis, it all seemed to slip away from you at the start. Tell us about that moment?
LH: I don't really remember much of it, honestly, it was quite a long time ago really. I don't know, maybe I got wheelspin. It doesn't really matter, Valtteri got a better start. Once we got to the first corner, we held position, we had the front row still. And Valtteri did an exceptional job throughout the race, so congratulations to him and after that it was just about bringing the car home.

Q: You talked on the radio about maybe some tyres issues. Did that play out?
LH: No, not really. I wasn't entirely happy with the balance I had but it wasn't the end of the world. It wasn't a problem for me to finish second.

Q: Thanks. Coming to you Max: If we had said to you before this race that you would finish 35 seconds ahead of the lead Ferrari, what would you have said?
MV: I would tell you ‘we will find out on Sunday'. Winter testing doesn't really show the true picture, as you can see this weekend. We had a good car. In the start, stayed out of trouble. It was just very hard to stay close to Seb, as my tyres were overheating very quickly. I just did my own pace, a manageable pace, and we could extend our stint a little bit and then when we did the pit stop afterwards we had a bit fresher tyres than Lewis and Seb ahead. I managed to get by Seb, which is not easy around this track, because it's just so hard to follow. But very happy to get to third. Trying to challenge for second was a very positive feeling, especially after my Friday. At the end we couldn't pull it off, but in general I'm juts very happy to be on the podium. I think we managed to turn it around in a very positive way after Friday and for Honda to have their first podium in the V6 era is a great start, so big congrats to them.

Q: (Yianni Mavromoustakos - talkingtorque.com.au) Question for Max. How did you find the Honda engine after your first race with it - and do you think you'll be capable enough to compete for top spot?
MV: Well, I think in terms of speed we had throughout the race, it was again a very good step forward to last year. If I just compare top speeds against the other two top teams, so I'm very pleased for that. Also, in general, the engine has been performing really well, without any issues. So, that is also very important. I guess time will tell if we can fight for top spot.

Q: (Scott Mitchell - Autosport) Max, obviously the performance of the Red Bull Honda package, evidenced by the fact you finished third - but how encouraging was it that you were not only able to finish third on the road but were able to push Lewis and show performance all the way to the end. It didn't look like you were having to manage the package at all towards the end.
MV: No, we didn't. Well... you always have to manage the tyres because as soon as you get close to the car ahead they overheat, the tyres. In general, just very pleased, because I could at least have a go at it, in terms of top speed. Good progress, and there are a lot of positive things coming as well, and so far we have been working really well together. Very pleased with that. I think Valtteri was very far ahead still. It was a good result today, but we have to work hard to, of course, improve.

Q: (Heikki Kulta - Turun Sanomat) Congratulations Valtteri. For the first time in six years, a Finnish driver is leading the championship. How does it feel to be first time there as a leader?
VB: Congrats to you as well! Thank you. Obviously, I don't think I was ever leading a championship. Obviously I know it's only the first race of the year. I'm not so good with the numbers of the days and statistics but all I can say is that I'm really pleased with the way the season has started. First of all for us as a team, we have such a strong package going forwards and then, for myself, after quite a tricky last year, to have started the season like this. It's very good and I look forward to the next race.

Q: (Roger Byron - Beyond the Racing Line) For everyone, how was it with the new aero package, following cars this weekend? In a race you find out more...
MV: Ask Valtteri how it was following!

No different to previous seasons?
LH: No.

You were pretty close to Lewis at the end there Max...
MV: Yeah, I had no chance to get by. It is still very hard. The only positive thing what we improved is the DRS effect. So, as soon as it opens, it's a lot more powerful than last year but following is still a lot of turbulence.

Anything to add Valtteri, when you were coming through traffic...
VB: It was quite... I didn't get close enough to traffic ahead to really see a difference.

Q: (David Coath) Valtteri, you drove the perfect race and your pitcrew was perfect as well. How does that make you feel when you know how much everyone in the team is giving?
VB: It means a lot. It is teamwork and nothing comes for free. Or by one person's efforts. We've all worked for this result we've got now as a team together, over the past years and over the winter, and over the weekend. I'm very proud of every single person here in the team at this race weekend but also at the factory. There's many hidden heroes in Brackley and in Brixworth. Just want to say a massive thanks to them and I really know how much they work and how much it means.