All questions are answered as Hamilton storms to Melbourne pole 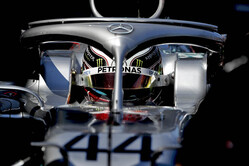 If nothing else, in just over an hour's time we should be able to put to bed all those annoying "10 things we need to know..." and "5 things we learned..." headlines that have dominated the F1 media in recent weeks.

We should also know, whether - in terms of Mercedes and Lewis Hamilton's claims regarding Ferrari's 0.5s advantage - whether it really was all BS.

Based on the evidence of the three practice sessions thus far, it was, with Lewis Hamilton leading the way in all three.

However, this is when it really matters - when the BS stops, so to speak - as the gloves finally come off, legs and stretched and the mode is full-on party.

Red Bull appeared to lose a little ground this morning, but then again, other than a new chassis for Verstappen, the Austrian team has been keeping its cards close to its chest, keeping its runs on the softest rubber late and to the very minimum.

Whether Mercedes was bullshitting and sandbagging, or whether its two rivals have something in reserve, will soon be revealed, as will the pecking order of the midfield.

Haas was very strong this morning, finishing ahead of Renault, however, as in testing, we don't know about fuel loads.

While both McLaren and Racing Point were further behind, it was interesting to note the disparity in performance within some teams, most notably Toro Rosso and McLaren, where the more experienced Kvyat and Sainz led the way.

Though Kimi Raikkonen was at the wrong end of the timesheets, and his teammate 12th, this was down to a DRS issue, the Finn having looked strong for much of the session.

Indeed, Raikkonen, along with Bottas, Verstappen and the Renault pair were quicker in FP2 than they were this morning.

The one certainty this afternoon, the one thing we do know, the one thing we have learned, is that unless there is some sort of divine intervention, the Williams pair will be eliminated at the first hurdle, though who else fails to make the cut remains to be seen.

The lights go green and Norris, Kubica and Russell are first out.

Norris posts 24.654 and Kubica 26.728 as Vettel and Leclerc head out on the medium rubber. All others thus far are on the red softs.

Unsurprisingly, Vettel goes quickest with a 23.891, though he is subsequently demoted by Raikkonen, Leclerc and the Kvyat, the Russian posting 23.313.

Giovinazzi goes third, ahead of Raikkonen, Albon and Vettel, as Hamilton heads out on softs.

Hamilton goes quickest with a 22.681 but is instantly leapfrogged by his teammate who posts 22.658.

Hamilton goes quickest in the first two sectors, maintaining the pace in S3 as he goes top with a 22.043.

Fourth and twelfth, for reasons only they know, the Ferrari pair persist with the medium tyres.

With 2 minutes remaining, Magnussen, Stroll and Albon comprise the drop zone with the Williams pair. The Alfas and Sainz are hovering.

Replay shows Kubica clouting the wall at T10 and getting a puncture for his troubles.

Along with the Williams pair, Stroll, Gasly - yes Gasly - and Sainz, miss the cut.

That session really came alive in the final minute or so, hence some very odd names near the top of the timesheets, this of course caused problems for those drivers who had already settled for their times, not least Gasly.

No sooner have the lights gone green for Q2 than Hamilton is out on track, followed by the Ferraris. All are on softs, which is likely to be the order of the day (session). Bottas subsequently joins them.

A mistake, caused by traffic ahead which caused him to lock-up, in the final corner means Hamilton can only manage 21.861. Nonetheless, Vettel posts 21.912.

Raikkonen goes fifth (22.349), ahead of Hulkenberg, Kvyat, Albon and Giovinazzi.

As Magnussen goes sixth with a 22.519, all eyes are on Verstappen who heads out on the softs.

A mistake in the final corner means Grosjean can only manage 22.906, which puts him tenth.

As they head out for the final assault, sporting the tyres they will probably use at the start tomorrow, Bottas, Hamilton, Vettel and Raikkonen are on brand new tyres. Indeed, only Leclerc emerges on used softs.

Hamilton goes quickest in S1, while Raikkonen and Ricciardo fail to improve.

Norris goes ninth, but Giovinazzi fails to improve, as does Kvyat.

Perez goes tenth (22.532) while Vettel aborts his lap after running wide and through the gravel and wisely settles for sixth.

Magnussen and Norris are first out for Q3. Soon, all bar Raikkonen and Perez are on track.

Hamilton reports that he's struggling with his right-front... brake.

The Mercedes pair trade fastest sectors, and while Magnussen posts a 22.907 benchmark, Hamilton responds with a 21.055 and Bottas a 20.598. A very, very fast lap from the Finn.

Verstappen goes fifth with a 21.656 ahead of Grosjean, Magnussen and Norris.