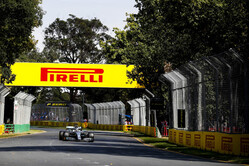 The cars are faster than last year: the best time from Mercedes driver Lewis Hamilton in FP2 was more than 1.3 seconds faster than the equivalent time last year, despite the cars being heavier. There is a strong chance that we'll see a new lap record in qualifying.

The margins seem close in the midfield, but - so far - there is a clearer gap at the top. A high degree of track evolution took place throughout the two free practice sessions, as usual at Albert Park.

The tyres behaved as expected today with teams trying all three compounds in warm conditions (24 degrees ambient, 42 degrees on track in the afternoon).

Tyre performance is satisfactory: no issues of blistering or graining. The graining sometimes seen in Barcelona testing has disappeared in warmer weather, as expected.

Mario Isola: "First and foremost, the events of this weekend are insignificant compared to the loss of Charlie Whiting yesterday, who leaves a massive void in the sport that is impossible to fill. Having worked so closely with him since we arrived in Formula 1, he will be greatly missed by all of us at Pirelli.

"Tyre-wise, there were no big surprises from the first day of free practice this year, apart from a gap of nearly a second between soft and medium: a bit more than we expected. Judging by initial feedback from the teams, they seem happy with the overall performance of the tyres in these conditions, while for fans having only the hard, medium and soft names on track makes everything easier to understand. There's still plenty to come from this weekend, with past experience showing us that the circuit continues to evolve."