Hamilton edges out Ferraris and Verstappen in opening session 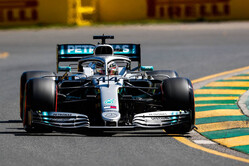 Ahead of today's opening session, the first practice session of the 2019 season, the air temperature is 20.7 degrees C, while the track temperature is 31.6 degrees. It is bright and sunny.

With most of the teams - but not Mercedes - bringing upgrades here, we can expect many of the cars to look different to how they looked in Barcelona a couple of weeks ago, none more so than the Racing Points.

Then again, having ditched the Mission Winnow livery the Ferrari looks different, as does the McLaren which has ditched BAT for 7-11.

The lights go green and Raikkonen is first out, followed by Sainz, Norris, Vettel and Kubica.

Six minutes in and all have made an appearance bar Giovinazzi and Grosjean. That said, the Italian subsequently heads out, leaving the Haas driver as the only 'no show'.

After several minutes of inactivity, Bottas heads out for a second run. Shortly after, Norris, Russell and Sainz head out also.

Bottas gets things underway with a 1:26.454, as Kubica and Albon head out.

No sooner has Russell gone second than he is leapfrogged by both Norris and Sainz, the McLaren 7.2s off the pace and the Williams 10.3s.

More and more drivers head out as Bottas improves to 24.679.The Finn is on the mediums, while Sainz and Norris are on hards.

Hamilton goes second with a 25.705 on the mediums as Vettel heads out.

Verstappen's first lap, on the softs, sees the Red Bull driver go second, albeit 0.709s off the pace.

Vettel can only manage a 27.388 on the softs, having lost time in traffic, as Magnussen goes fourth, ahead of Kvyat.

Despite a lock-up in T3, Hamilton improves to 24.856, ahead of Verstappen, Kvyat and Leclerc, who posts 25.939 on the softs. Both Mercedes drivers having posted their times on the mediums.

On the softs, Verstappen improves to second, splitting the Mercedes, with a 24.765.

Stroll goes fifth, ahead of Gasly, while, after 36 minutes, Hulkenberg is the only driver yet to post a time.

Hamilton retakes second with a 24.378, as Grosjean goes eleventh, ahead of Ricciardo, Giovinazzi, Raikkonen and Sainz.

On the softs, Kvyat posts 25.187 to go fourth, ahead of Gasly, Stroll and Leclerc.

At 40 minutes, when the extra set of tyres have to be given back, it's: Bottas, Hamilton, Verstappen, Kvyat, Gasly, Stroll, Leclerc, Magnussen, Vettel and Albon. Hulkenberg has yet to post a time, the Renault understood to have an electrics issue, while both Williams are over 3.7s off the pace.

"What have we learned from the first half of FP1?" ponders Pirelli. "Mercedes is fastest, no big surprise. But they're both on the medium tyre, whereas Red Bull and Toro Ross behind them are on soft. Next fastest medium runner? Stroll."

After almost ten minutes of nothing, Norris heads out to give the crowd something to look at. He is subsequently followed by Kvyat and Magnussen.

Bottas also head out, the Finn now on the softest rubber available.

As Bottas improves to 23.886, Russell stops at the end of the pitlane and has to be rescued by his mechanics.

Hamilton starts his first lap on the soft rubber, and immediately goes quickest in S1. Elsewhere, Grosjean improves to seventh with a 25.571. However, the Haas driver is demoted when Giovinazzi posts 25.166 to go fifth... on the mediums.

Hamilton crosses the line at 23.599 to go quickest.

Verstappen splits the Mercedes pair with a 23.792, the Dutch driver, like the Silver Arrows, on the softest tyre.

Magnussen goes fourth with a 24.934, as Ricciardo loses time behind Grosjean. The Australian crosses the line at 26.225 to remain 15th.

Leclerc and Vettel are both on track, the Monegasque posts PBs in all three sectors to go second with a 23.673 - 0.074s off Hamilton's best - while Vettel subsequently posts 23.637 to edge within 0.038s of the world champion. Shades of the final days of testing.

Out come the yellows as the camera picks up on Albon who has clouted the barriers and lost his front wing. Indeed, as the replay shows the Thai driver losing it in T2 and hitting the barriers with rear of the Toro Rosso, which promptly spun and clouted said barriers with its front end also, the session is red flagged.

The session re-starts after a couple of minutes once Albon has managed to get his car back to the pits.

Hulkenberg is first out, followed by Raikkonen and Russell.

Raikkonen improves to sixth with a 24.831 on the softs.

"I couldn't turn left, I nearly went off," complains Sainz.

Phew! A lucky escape for Bottas who goes off after clipping the grass with two wheels, and heads down the escape road. On spinning the car around to get going again, he clips the grass again and is lucky to hold it all together.

While Hulkenberg is already up to tenth with a 25.015 posted on the softs, teammate Ricciardo is down in 17th, 2.035s off the pace.

With four minutes remaining, all but Albon and Sainz are on track.

At the bottom of the timesheet, Kubica improves but remains 4.3s off Hamilton's pace. Teammate Russell is 5.1s off the pace.

"I have something with my rear tyre," warns Kvyat, "I don't know what it is." Onboard footage does indeed show something odd on his right-rear.

The session ends, while Hamilton heads Vettel, Leclerc and Verstappen, the four are covered by just 0.193s.

Norris completed the most laps with 31, ahead of Bottas and Kvyat, who both completed 30, while Hulkenberg completed just 11.