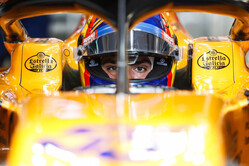 No matter what else might have happened at Barcelona this morning, the headlines will be dominated by just one aspect, Sebastian Vettel crashing out in the Ferrari SF90.

The Italian team was quick to state that it was a "mechanical problem" which caused the car to go off at T3 and hit the barriers, causing damage to the left-front of the car.

While Auto Motor und Sport pointed out that the car was running "Mercedes-style wheels" it was quick to make clear that it was not suggesting that this was a contributory factor to Vettel's crash.

Meanwhile, with an eye on Vettel's numerous mistakes in the latter half of last year, social media sprang to life, some already writing off the four-time world champion's hopes.

With Ferrari admitting, just five minutes before lunch, that the SF90 won't be back on track "for a few hours", rival teams rued the forty minutes running they lost in the wake of the incident which necessitated repairs to the barriers.

Between them the ten drivers on duty completed 518 laps as they appeared to carry out various different programmes.

Before his off, Vettel had completed 40 laps, and had posted the second best time, unfortunately, having lost track-time yesterday, Charles Leclerc faces more of the same this afternoon as the SF90 is repaired.

It was another strong morning for Red Bull, where Max Verstappen completed 69 laps on his way to posting the third best time. The only blip was when he stopped at the end of the pitlane, bringing out the red flag, but minutes later he was going again after being rescued by his crew.

Unfortunately, at some stage somebody is going to have to tell the youngster that he really needs to try a different tyre compound than the C3 he appears absolutely besotted with.

After yesterday's trials and tribulations, it was an altogether more productive session for Valtteri Bottas, the Finn completing the most laps (74) on his way to fourth best.

While Sainz and Vettel stole the headlines, albeit for different reasons, Kvyat, Raikkonen and Perez went about their business, running their various programmes and putting in the mileage.

Covered by just 0.142s, one gets the impression that this is where the excitement will lay in the months ahead.

Following a typically slow start, Williams began to get serious as the morning developed, Robert Kubica adding a further 42 laps to the FW42's tally, and posting a fairly respectable 1:19.367, albeit on the softest compound.

Romain Grosjean completed 57 laps in the Haas on his way to posting the ninth best time, while Daniel Ricciardo opted for long runs on high fuel, which though left him adrift at the foot of the timesheets, showed strong 'race pace' and consistency. The Australian, who unlike Verstappen, varied his compounds and posted his best on the C1s, completed 72 laps in total, the second biggest tally of the morning.