Ferrari leads the way in terms of engine mileage 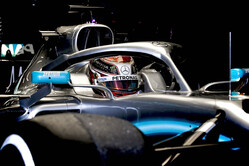 Even if Williams had been at Barcelona on Monday, bright eyed and bushy tailed, the FW42 fully ready for action, it is unlikely that Mercedes would have overhauled Ferrari in terms of engine mileage in the opening week of testing.

Between them the three Ferrari-powered teams completed 1,489 laps compared to the 946 of the Mercedes-powered teams.

That deficit of 543 laps would have been a tough task for Williams, especially when you consider that other than the Ferrari and Mercedes works teams the remainder averaged around 425 laps.

However, in terms of engine mileage, Mercedes wasn't even runner-up to Ferrari, that particular honour went to Honda.

In total the two Honda-powered teams completed 957 laps, an amazing achievement when you consider that only last year the Japanese manufacturer - then supplying just one team - completed 324, and in 2017 with McLaren completed 425.

Bringing up the rear was Renault, with the works team and McLaren completing 878 laps.

In terms of teams, having opted for consistency and reliability over performance, it comes as no surprise that Mercedes leads the way, Lewis Hamilton and Valtteri Bottas completing 610 laps between them.

However, Ferrari was just behind on 598 laps with Alfa Romeo on 507.

The two Honda-powered teams are fourth and fifth, with Toro Rosso edging out its sister team, while bottom of the pile - if we ignore Williams - is Racing Point with just 248 laps to its credit, less than half of what the three leading teams managed.

The world champion, refreshed after his winter break, was the most industrious driver, completing 307 laps, while teammate Bottas was only 4 behind.

The Ferrari duo were third and fourth, ahead of Charles Leclerc and rookie Alexander Albon, while Sergio Perez completed just 97 laps, less than a third of Hamilton's tally.

Indeed, when you consider the opening four days, the two things that leap out at you are the staggering reliability of these cars (and engines) and the fact that times are quicker than last year even though it was expected that the new regulations would slow the cars by around 1.5s.