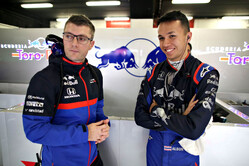 Was he teasing us? Twice this morning, Lewis Hamilton headed out on Pirelli's softest compound, the C5, suggesting that we were about to see the world champion sign off his testing programme for the opening week in style.

However, on both occasions, he merely appeared to be teasing us, or was it Ferrari and Red Bull.

That said, earlier in the day, true to James Allison's comment yesterday that Mercedes would focus on performance, Hamilton had gone quickest on the harder C4 rubber.

On the softest tyre in the range however, the Briton failed to improve, but must go into the weekend feeling mighty confident.

While we have yet to see Mercedes truly show its hand, Ferrari does appear to have the edge, particularly in the twisty final sector, a sector where Hamilton almost came to grief when he almost literally tripped over a very slow Robert Kubica in the Williams.

The morning belonged to Alexander Albon, who, on only his third outing in an F1 car, posted the best time, taking over where teammate Daniil Kvyat left off yesterday.

Like the Russian, Albon's best time came on the C5 rubber, but if nothing else this once again showed that the Honda has raw pace.

Sandwiched between the Toro Rosso and Mercedes was Daniel Ricciardo, who produced a 17.913 from out of nowhere on the C5 rubber, the quickest time we've seen from Renault this week.

Ferrari appeared to be adopting Mercedes policy of doing things its own way this morning, Charles Leclerc opting for a series of longish runs on the favoured C3 as opposed to blitzing the timesheets.

There was a late scare when the youngster went off into the gravel at T5, but 'golden boy' was able to continue, without the need for red flags or flat-bed trucks.

It was another solid morning for Alfa Romeo, with Antonio Giovinazzi completing 56 laps, the Italian, like Leclerc, sticking with the middle of the range C3s.

Romain Grosjean posted Haas' best time of the test, the Frenchman completing 64 laps on his final morning of running before handing over to teammate Kevin Magnussen.

At a time Helmet Marko is admitting that Ferrari is the top team, Pierre Gasly took the RB15 to seventh on the timesheets, the Frenchman completing 56 laps.

Poor Lando Norris was the cause of the morning's sole red flag, the McLaren driver going off just twenty minutes into the session when he spun at T5. That said, after Sainz missed the first two hours of running yesterday, it was good to see the Woking team in action from the start today, Norris completing 48 laps in total.

To be fair, the cold conditions caught a number of drivers out early on, particularly at T1, but Norris' was a most peculiar incident with the MCL34 suddenly twitching and heading off track while travelling at low speed. The Briton was lucky not to clout the barriers.

Posting a 1:55 over an hour into the session, there were fears that Williams was on course to become a laughing stock, but over the course of the morning Robert Kubica delighted the team, and his fans, by chipping away, eventually getting down to a 21.5 and putting 48 very useful laps on the FW42.

The first part of the session was spent running the obligatory 'garden gate' aero rake, and flo-vis, but once shorn of these, the Pole was able to go about the catch-up work the team so desperately needs.