Ferrari continues to impress as Leclerc sets pace on Day 2 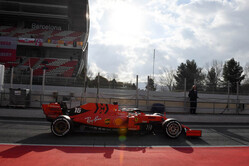 Had anyone been under the impression that Sebastian Vettel's domination of proceedings yesterday was in anyway a fluke, today his young teammate sought to put such doubts to rest.

As was the case with the German on Monday, today saw Charles Leclerc top the timesheets and complete the most laps, meaning that after two days of testing the Ferraris are the clear pace-setters, separated by just 0.086s and almost a second of their nearest rival on the same tyre compound.

The SF90 ran like clockwork, and while it is totally pointless to start imagining what might be, it is clear that Ferrari has once again produced a very good car that is quick and reliable straight out of the box. Even in the final moments of the session, the Maranello outfit was collecting precious data, the front wing on the car sporting flo-vis.

"I am very happy with the way today went," said the Monegasque at the end of the day. "Despite some red flag interruptions, we were able to get through all our programme and to do 157 laps, which has produced a lot of useful data. In terms of feeling, I quickly felt comfortable with the SF90 and I have to say I really enjoyed myself.

"Emotion? There's always going to be some when you get into a Ferrari, but today I put that to one side because I had a job to do for the team. Let's hope we keep going like this over the next few days, because it's important to make the most of the few on-track testing opportunities we have."

Similarly to yesterday, McLaren opted to send out their driver - in today's case Lando Norris - on a late run shod with the softer C3 rubber, the Briton following the example of his Spanish teammate and claiming second on the timesheets.

Whether this is a ploy by Zak Brown and his Business Advisory Group to attract new sponsors we don't know, but in the Woking team's favour is the fact that the MCL34 completed 104 laps, a far cry from those miserable early days with a certain former engine supplier.

"Being my first time in the car, I'm pretty happy with how today has gone," said Norris. "The team has done an awesome job getting everything together, and over the last two days we've done a lot of mileage, which is the best thing we can hope for.

"The times aren't important to us, it's about getting through the plans we have to do, especially in this part of the season when there are a lot of new things on the car to test.

"I've not done much long running in the past or pit-stops, so getting up to speed and talking to my engineers are the most important things for me to get on top of over the next two weeks. Laps, mileage and reliability are the main objectives, as well as getting to know the car.

"There are still a lot of things we need to continue to work on and improve over the next few days. It's definitely a work in progress."

Kevin Magnussen was third quickest, however, as a result of a seat issue the Dane ended his test early, which meant that reserve Pietro Fittipaldi was drafted in ahead of schedule, the young Brazilian not due to drive the car until tomorrow afternoon.

Starting late in the day, Fittipaldi was soon up to speed, and if nothing else evoked dewy-eyed memories in fans of a certain age as they recalled another young driver named Fittipaldi in a black and gold car.

"First impressions of the VF-19 were very good," said Magnussen. "The car seems to be handling well, it was showing consistency. I certainly have a good feeling to start off with. Of course, there's a lot more work to be done when it comes to the details, but there's no worries at this point."

Following his spin in the opening moments of the day, which was down to a steering issue, Alexander Albon shrugged and put it all behind him, and by close of play was fourth quickest with an impressive 132 laps under his belt.

That said, he was lucky not to incur damage when an unsafe release saw him leave his garage to find himself in the path of Nico Hulkenberg, who was on a race simulation.

"Today was up there with one of my all-time great experiences!" beamed the Thai driver at session end. "It's been a really good day.

"At the start I was thinking to myself 'don't spin it this morning', and that's exactly what I did! It was really tricky out there because the track was so cold that you couldn't drive slowly - as soon as you drive too slow your tyres get cold, it becomes unpredictable and it's like driving on ice.

"Once I got into my rhythm it was a smooth day and we had no issues, apart from a couple of spins later on, but I was just exploring the limits to see what the car was capable of.

"I did a few laps on Wednesday for our Filming Day, so today wasn't a totally new experience to drive an F1 car, and I've also been in the simulator many times, so I had a general idea of what the car could do. However, the high speed of the car is definitely new to me and it was a bit of a positive shock - I'm enjoying it a lot! I'm still smiling from when I got out of the car and I'll continue smiling throughout tonight until tomorrow!"

The Alfa continues to impress and while marginally quicker than his Finnish teammate, it should be noted that Giovinazzi was on the softer rubber.

"It was a great experience to drive my own car for the first time," said the Italian, "and I look forward to developing it together with our team throughout this season.

"We are at the beginning of the testing process, so we tried out some different aerodynamic configurations to learn about the behaviour of the car. I felt very comfortable in it, and we put in a good number of laps. Overall, it was a positive day and I look forward to being in the car again on Thursday."

As is ever the case, Mercedes did its own thing, running Lewis Hamilton this morning and Valtteri Bottas in the afternoon.

Not bothered by heroics or a need to top the timesheets, the German team quietly went about its business, the W10 running like clockwork and completing 163 laps in total, which means that in reality it completed more than the Ferrari.

"It's been a good day overall," said Hamilton. "It was quite cold in the morning, so switching the tyres on was a little bit tricky, but it seemed like a few people had similar issues.

"We were focusing on working through our run plan and we got through everything we wanted," he continued. "It's good that we're getting in a lot of mileage and we will try to increase that over the next days as we continue to discover the characteristics of this car.

"That's the exciting part about it - learning something new and being faced with different challenges. Everyone is working so diligently, I'm really happy to be here with everyone for the seventh year in a row and I'm excited for this journey that we're embarking on."

"We did a lot of laps today and again managed to complete our run plan," added Bottas. "We're learning a lot about the W10 with each run and we're building a better understanding of the set-up.

"The car was better balanced than yesterday, but there's still a bit of room for improvement. As you can tell from the lap times, we've been focusing on long-run work. I'll be in the car tomorrow morning, so it will be a busy evening for me, taking in all the learnings from today. It's been a pretty normal test so far; fortunately, the car has been very reliable, so that's good news."

It was all going well for Pierre Gasly until late this afternoon, when the Frenchman lost the rear end exiting T10 and went backwards into the barriers. Though there didn't appear to be much damage, it is unclear whether the gearbox might have suffered, this at a time when spare parts are at a premium.

The fact that the youngster continued to wear his helmet firmly in place even when back in the garage talking to his engineers, gives some clue as to where he felt the blame lay.

"The day was positive and I was really happy to be back behind the wheel after the winter break" said Gasly later. "The first feeling is good. It was important for me to get comfortable in the car and we managed to do more than 90 laps.

"This afternoon, I was pushing and out of Turn 10 I went on the power, upshifted to fifth and lost the rear of the car. It was quite annoying to lose the last hour of testing.

"Apart from that, we tested a lot of things and got a lot of good information, there is a good potential. Of course we still have a lot of work to do over the next six days of testing but for me, aside from the last bit, the first day was great."

A mixed day for Renault where this morning's running was curtailed by a rear wing failure for Daniel Ricciardo which was DRS related.

The Australian, who spun off at T1 following the failure, was able to head out for a couple of laps before the lunch break, but in the afternoon teammate Hulkenberg put the team back on a good footing with a race distance that went without any problems.

Interestingly, as was the case yesterday, the Renault pair were separated by the barest minimum, yesterday it was 0.003s and today it was 0.049s, which if nothing else offers the prospect of some great duels between the pair this season.