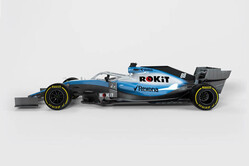 Having missed the first two days of testing, Williams is scheduled to arrive at Barcelona early on Wednesday morning.

"Our car looking likely to arrive at the circuit between 4 – 5 am tomorrow morning," said the team in a statement this afternoon. "Obviously there will still be a fair amount to do but we will be working as fast as we can. We are unlikely to run before lunch though."

Behind schedule, the first clear sign that there was an issue came after last week's livery unveiling when the team confirmed that it had had to cancel a planned shakedown.

Then came the news that it would miss the first day of testing, which was followed by yesterday's admission that the car would not be on track until Wednesday at the earliest.

While the Grove outfit has not revealed the exact issue behind the delay, merely claiming that it was a delay in the build process, there has been speculation that there is in fact an issue with a particular part of the car, said to involve the brakes and parts not fitting as they should.

With the team needing to take a significant step forward this season, missing at least two days of testing is not going to best prepare the Grove outfit for Melbourne - though this didn't stop Brawn GP who didn't make it to the track until the final couple of tests ahead of the start of the 2009 season - and already there is speculation over the future of technical boss Paddy Lowe.

Check out our Tuesday gallery from the Barcelona test, here.