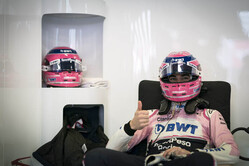 On the last day of the first week of pre-season testing, both Lewis and Valtteri set their fastest laps yet in the Mercedes-AMG F1 W10 EQ Power+. The team focused on building its understanding of the 2019 tyres today, looking at grip and balance differences between the softer compounds.

Lewis drove the car in the relatively cold morning, gathering tyre data on different compounds. Valtteri was behind the wheel in the afternoon, working through a similar programme.

Lewis Hamilton: It was quite cold in the morning which meant that it was a little bit difficult with the tyres for everyone. In general, the car was feeling better today and is coming together. However, we still have to keep on digging deep, analysing the data and the changes that we are making. The reliability has been really solid which is a great showing of all the hard work that everyone in the factory has done. But we have to keep on pushing, the competition looks very strong. The weather has been good all week so we could get through our programme and it was great to see the fans out there. I'm looking forward to coming back next week.

Valtteri Bottas: The first week of testing was really good for us in terms of reliability, we got a lot of mileage in with the new car and didn't experience any major issues. Today we did some shorter runs, seeing how the W10 works when you try to extract a little bit more performance out of it. We've been making progress throughout the entire week, the car felt better every single day. We're now looking forward to next week when we will hopefully make even more progress. Many thanks to the entire team, it was a good first test. Now we're all hungry to improve even more in the second test.

Andrew Shovlin: Lewis had a tricky start to the day as the track was so cold it was difficult to get the used tyres to work. To avoid doing any damage, we waited around for a while for the surface to warm before getting into the programme. It's the first time we've tried the softer tyres on the W10 and today was just a first look to understand the grip and balance differences between them. Valtteri's programme in the afternoon was quite similar to Lewis, running through the same compounds. We've had a very productive few days and the car has run very reliably which has helped us get through the programme. It's clear from this week that we're going to have strong competition this year with Ferrari and Red Bull but hopefully we'll have another good test next week which will help us with our final preparations for Melbourne.

Charles Leclerc was at the wheel of the SF90 on what was the last day of this four day Formula 1 pre-season test at the Barcelona-Catalunya Circuit. The Scuderia Ferrari Mission Winnow driver completed a total of 138 laps; 72 in the morning and 66 in the afternoon. That means the SF90 has covered 598 laps in this first test, (303 for Sebastian Vettel and 295 for Charles Leclerc), equivalent to a total distance of 2783,69 kilometres.

Following the installation lap, the Monegasque driver then got down to a series of runs to evaluate different set-ups, running various tyre compounds. Towards the end of the morning, Charles set what would be his fastest lap of the day in 1'18"046. The afternoon featured further tyre testing with the car running in different configurations.

During the lunch break, Leclerc spoke to the media about his first days in Ferrari. "For now, I don't want to say too much, because this is just testing" he said. "But the feeling from the car is very good. We did many laps, the reliability was good and every day we managed to complete our programme.

"I feel quite at ease in the car, even if there are still a few things I need to get used to, including how the team operates. But this is quite an easy car to drive. As Seb said, this doesn't feel like a new car, but more like one that is quite well developed. Driveability is very good, which shows that the team has done an amazing job over the winter to bring a very solid car here.

"As soon as I arrived here in Barcelona, I switched to 'work' mode and put any emotion to one side to get on with the job as well as possible," concluded Charles. "The results? I'm not really focusing on that side of things. I'm focusing on myself, trying to do my best and to improve with every lap."

In between now and the start of the championship, which gets underway in Australia on 17 March, there are a further four days of testing scheduled for all the teams, again at the Barcelona track. The session gets underway on Tuesday 26 February and end on Friday 1 March.

Pierre brought Aston Martin Red Bull Racing's first pre-season test of the year to a close today by working through 146 laps of the Circuit de Barcelona-Catalunya as the Team focused on long runs and the evaluation of development items.

"It was a really productive day" said Pierre. "We managed 146 laps, so a lot of long runs but also a lot of tests done for the Team. The overall feeling with the car is really good. It doesn't show on the lap times today, but it is testing and we know what we're doing, so I'm pretty happy. This week has gone well. I managed to do a lot of laps, which was important for me, and I was able to get used to the car and my new engineer. We've done some good work in that regard this week and there's a lot more to come next week as we get ready for Melbourne."

"We had a very smooth, tidy finish to the first test and Pierre got through a big workload today" said Head of Race Engineering, Guillaume Rocquelin. "We spent much of the day on the C3 tyre and focused on longer runs but it wasn't just about piling on the miles. There was plenty going on in the background that will aid development of the car. Overall we've had a very successful first test. We've been able to tick off all the items on the run plans and this test has thrown up a few interesting things that we can factor into development. We've had great support from the factory too, as shown with the rear wing we ran yesterday, so it's been a very consistent and productive week. We got to where wanted to be and beyond."

Rich Energy Haas F1 Team split steering duties in the Haas VF-19 between Romain Grosjean and Kevin Magnussen on the final day of the first week of preseason testing.

Grosjean successfully completed his morning program accumulating a total of 64 laps around the 4.655-kilometer (2.892-mile), 16-turn circuit. The Frenchman cycled through the C2, C3 and C4 Pirelli tire compounds, with a fastest lap of 1:18.563 delivered on his second and final stint on the red-marked C4 rubber – the second softest option available at the test. His lap time was good for sixth fastest at the lunch break and ninth overall on the timesheets.

Magnussen returned in the afternoon keen to build on the 59 laps he set during Tuesday's shortened run-plan. The Dane worked through a series of runs utilizing fresh C3 yellow-walled compounds, producing a best time of 1:18.720, which placed him 10th from the 14 drivers participating Thursday. He ended a solid session with run outs on used tires, the added mileage taking his total number of laps for the afternoon to 66.

The teams get a four-day break before the final week of testing resumes on Tuesday, Feb. 26 where Magnussen will be back in the Haas VF-19. Grosjean returns to the car on Wednesday, Feb. 27, with Magnussen getting his last preseason test drive on Thursday, Feb. 28. Grosjean wraps the final day of testing on Friday, March 1.

Romain Grosjean: "It was a good morning. I pretty much did the whole program we had planned, even finishing earlier than scheduled, so that's good. There were no problems on the car, which was obviously something we were looking at after the first few days. The car still feels very good. We're still trying things, testing things, and getting the mileage in. I think we're fairly happy with where we are."

Kevin Magnussen: "I was happy to get a lot of laps in this afternoon, and more importantly, I felt comfortable in the car. We can see how the car's improving and we enjoyed some consistent running today through both sessions. Of course, there's plenty more work to do, but I'm looking forward to driving the VF-19 again next week. We've definitely got something positive to build on as we prepare for the second test."

Guenther Steiner: "The end was better than the beginning of our test week. We're happy with the mileage achieved, happy with the results. We ran our full program today, the first time we've been able to do that this week, so it feels like we've got something back that we lost at the beginning of the week with our technical gremlins. They seem to be sorted now. We're pretty upbeat and we look forward to test number two next week."