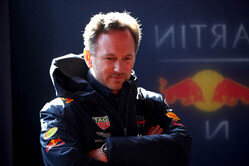 While this morning was mostly given over to performance runs which meant lap times that whetted our appetites for the season opener in a couple of weeks, this afternoon was given over to the long runs and race simulations that are the staple of testing.

Gasly's crash came around ninety minutes into this afternoon's session, the Frenchman damaging the front wing and the rear of the car in what was quite a heavy impact after losing the car when he 'dipped a wheel' on the grass.

Like Sebastian Vettel yesterday, the Red Bull driver was taken to the medical centre as a precaution, but it is the RB15 that will require surgery and careful nursing tonight.

It is the second incident of the test for Gasly, the Frenchman having clouted the barriers following a spin on his first day in the car last week.

In one of those strange coincidences that can only happen in F1, no sooner had Lance Stroll completed his 100th lap, the first time that a Racing Point driver has passed the magical mark this year, than he ground to a halt at the infamous corner where Gasly had crashed thirty minutes earlier.

"I made a mistake in Turn 9 and lost the car," said the Frenchman. "It was a pretty big crash, but I'm fine, a little bit shaken, but generally OK.

"I'm feeling more sorry for the guys in the garage," he admitted. "They have a long night ahead but the most important thing is that Max is back in the car tomorrow and we'll focus on the positives.

"It's not an ideal way to end the final test, but over the four days we managed to get lots of laps in and that was positive. We have good performance and we just need to understand how to maximise the package, so we bring the best car we can to Melbourne."

Fifty minutes after Stroll's stoppage, Charles Leclerc similarly ground to a halt at T9, the SF90 having run faultlessly for the previous 138 laps.

The switch from performance runs to race sims and the like meant that nobody improved their lap times in the afternoon, though several significantly added to their lap tally.

Leading the way, in terms of mileage if not pace, was George Russell as Williams continues to find its feet following its late start, the Briton completed an amazing 140 trouble-free laps, and even managed to finish ahead of Bottas and Magnussen on the timesheets.

While Leclerc completed 138 laps, which is pretty amazing when you think of the state of the SF90 just 24 hours earlier, the ever-reliable W10, in the hands of Hamilton and Bottas completed another 182 laps. This compares with the 138 completed by the Renault driver pairing and the paltry 69 of the Haas duo.

Over the course of the lunch break Haas discovered an issue with the exhaust on their car, hence Grosjean's failure to appear until over two hours into the session, while Norris was similarly delayed by an issue not yet confirmed by McLaren.

All-in-all this afternoon was a bit of a let-down following this morning's action, and knowing Mercedes as we do, we don't expect them to join in the fun tomorrow, the final day the cars are driven in anger before Melbourne.

Due to the performance running earlier, today was very much about the C5 compound, which has pretty much dominated the timesheets.

With a whole day in the car tomorrow - toccare ferro - Sebastian Vettel will get to show what he can do on the softest rubber, the German's best time thus far being on the ultra-reliable C3.

Speaking today, other than its graining issues, Bottas admitted that Mercedes still has work to do, while Gasly's off will not have made Red Bull and Verstappen's task any easier tomorrow.

Ricciardo's pace this afternoon was promising, but nonetheless, Renault looks likely to face some stiff competition in the midfield in the months to come.

While there remains a difference of opinion between drivers as to the effectiveness of the new aero regulations and whether they will aid overtaking, Leclerc's 1:16.231 is 0.990s quicker than the best time posted last year in pre-season testing, ironically by the Ferrari 'number 2' of the time. So in that respect at least, the 'experts' appear to have got it wrong.

"Today has been a good day," said Hamilton following his morning in the car, "lots of mileage, which is great for us. It has probably been one of the most positive days for us, we've really learned quite a lot.

"We've been able to apply our learnings from the morning to the afternoon, so I'm looking forward to seeing how Valtteri felt, but the car looked like it was in a better place. Our understanding of the W10 is continuously growing so it was definitely a positive day."

"We got a lot of laps in today which is always good," added Bottas. "I did a race simulation which was interrupted by the red flag, but it confirmed the progress we've made since last week.

"We're getting more and more prepared for Melbourne, but there's room for improvement and still a few question marks on where we stand compared to the competition. We're focusing on our performance; the entire team is pushing really hard and keeps improving the car and that's all that matters.

"We need to maximise the last day of testing as it will be our final chance to try out a few things ahead of Melbourne. Today was positive and I'm hoping for another good day tomorrow."

"It didn't look as though today would be easy," said Leclerc, "given that we had to make up for yesterday's lost time, but we got it done and that was very positive, especially as this was my last day in the car before Australia.

"I am very happy because we worked really well," he added. "It's been an encouraging start to the season and I feel about ready. Now, I can't wait to take part in my first real Grand Prix with Ferrari."

"We carried on with the program today and did what we needed to do," said Kevin Magnussen. "I was happy to get more laps in obviously. I'm still feeling good in the car and look forward to tomorrow's final afternoon of track time. The team's busy preparing for our last day testing, but we're all really looking forward to going racing now."

"We had an issue that was discovered at lunch and it took a long time to fix," admitted teammate Romain Grosjean. "It wasn't the afternoon I was after.

"I'm now just focused on tomorrow morning and getting my last taste of the car before we head to Melbourne. Generally, we've made some great progress in testing. The car's showing us the limits, and where we can work, the baseline is very good. We're happy with that baseline and the car's performance. We haven't focused too much on lap times at the moment.

"Melbourne will come and eventually we'll put everything together for qualifying. Right now, we're learning the VF-19, discovering a bit more, and it's getting better and better. The feeling is good, as it was last year."

"The morning went well, and we made some small improvements from the last two days," said Norris. "Many of the runs this morning were beneficial in helping us gain a better understanding of the car.

"I tried out various configurations during short runs," he continued, "which gave us more information on how the car reacts to different tyres and fuel loads. We followed that with some longer runs on harder tyres that helped us to improve the balance of the car.

"I'm more prepared for Australia than I was at the start of testing, especially for the longer runs. There's definitely still a lot of work to do, but overall I feel comfortable with the baseline we have and the direction we want to push in.

"I feel ready, and I'm going to spend the next two weeks working hard in the factory on everything I need to do to prepare our set-up for Melbourne."

"It's been another positive day in the car," insisted Stroll, "and a good way to finish my pre-season programme.

"We covered a lot of kilometres today - the most I've done on a single day all winter - and now I am really looking forward to going racing. We are going to keep learning about our new car, both tomorrow on our last day with Sergio in the car and back at base, and we are going to bring the best possible package to Melbourne.

"It's really tough to predict where we stand once we start racing," he admitted, "everyone is working on different programmes, but I start the season with a positive mindset."