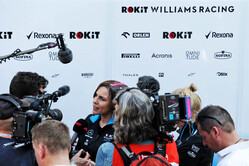 On the second day of week two of pre-season testing, Mercedes-AMG Petronas Motorsport focused on further fine-tuning the set-up of its 2019 contender. In the afternoon, the team also worked on race simulations.

Valtteri was first behind the wheel of the W10 this morning, working on the set-up of the car. Lewis drove the W10 in the afternoon session, also doing some set-up work before focusing on race simulations

Valtteri Bottas: It was a positive day, we did 74 laps this morning, focusing on set-up work and making some good progress. There's a lot of data for us to go through tonight to further improve our set-up and make sure we come up with the optimal programme for tomorrow. We learned a lot today and we will make sure to learn a lot again tomorrow.

Lewis Hamilton: We got a lot of laps today which is a good thing, but we've come across a few little hurdles, so we're just working our way through them, trying to be as diligent as possible trying to understand the causes - which is exactly what testing is for. Everyone is working flat-out and I'm sure we will get there. You need days like this to be able to bring light to the things that we need to work on.

James Allison: We did set-up work in the morning with Valtteri and continued with this in the early afternoon with Lewis, yielding some good results for both drivers. The race run in the afternoon, although quite considerably quicker than the last race simulation we made, was marred by front graining - something which we think, looking up and down the pit lane, could be a feature of the year. We need to make progress on graining resistance in the next couple of days, in order to make sure we have a good way of handling it by the time the racing season begins.

The second day as not particularly productive for Scuderia Ferrari Mission Winnow. The plan was for Sebastian Vettel to drive the SF90 in the morning and for Charles Leclerc to take over in the afternoon. However, an off-track caused by a mechanical problem just before midday, meant that no more running was substantially possible today.

Sebastian went out on track shortly after 9am and was trying the car in different configurations. Halfway through the morning, a mechanical problem with the front left corner on the SF90 saw Sebastian go off the track at Turn 3. The driver was unhurt but went to the medical centre for the usual checks. Up to that point, Sebastian had completed 40 laps, with a best time of 1:18.195.

Once back in the garage, the team set about a meticulous check of the car to establish the cause of the crash. The analysis is still on course. Meanwhile the SF90 was repaired in time for Charles Leclerc to get out in the afternoon for an installation lap.

"Clearly, we have not done as much running as we would have liked", Sebastian told the media during the lunch break. "But I'd still say I'm getting a positive feeling from the car. Last week was definitely productive as we completed a lot of mileage and also yesterday, we were able to make up for the track time lost in the morning.

"As for the accident," continued the German, "I was going into Turn 3 and I had a feeling there was an issue with the front left corner of the car and from then on, there was nothing I could do to avoid the impact. The good thing is I am totally fine and, by the end of the day, thanks to a great job from the mechanics, we even managed to get the car back on track."

Testing continues until the end of Friday and the team has decided to have its drivers do a complete day each at the wheel, so that the work can progress in a more linear fashion. Charles will drive tomorrow, before handing over to Sebastian for the final day.

Max took over at the wheel of the Aston Martin Red Bull Racing RB15 on day two of the final pre-season test of 2019. Despite an afternoon delay caused by some routine checks after Max took an off-track excursion, the Dutch driver logged an impressive 128 laps of the Circuit de Barcelona-Catalunya as the Team mixed morning set-up changes with an early afternoon focus on race preparation.

"Not a perfect day, but still a good one," said Max afterwards. "There are always things you want to check, instead of driving until something breaks. We did a routine check this afternoon and then got back out again at the end of the session. But even with the delay we had, we still managed to do over 120 laps, so I think it was still a very positive day. The more laps, the better and today we did a lot, so overall I'm happy."

Commenting on the day's running, Head of Race Engineering, Guillaume Rocquelin, said: "We had another good morning, following the same plan as yesterday, when we got through a lot of shorter runs and set-up changes. In the afternoon, we went into a scheduled race simulation. We managed two-thirds of that but after Max had a brief off, we pitted for some routine checks with the gearbox. It's not the easiest element of the car to get deep into, so it kept us in the garage for a while. When we did get back out, the change in track conditions meant we weren't going to learn that much so we focused on pit stop practice, which we had planned as part of the race work. Tomorrow, we'll pursue the same plan, which is all about understanding the car and gaining valuable information."

Grosjean's fastest time was a 1:18.330, earned on a set of Pirelli C5's. It placed him fifth among the 13 drivers who turned laps Wednesday at the home of the Spanish Grand Prix.

The day started with a series of short timed stints on C2 and C3 rubber, followed by longer outings to take Grosjean's tally to 57 laps by the lunch break. The afternoon run plan saw Grosjean sample the two softest compounds offered in preseason testing, the C4 and C5 tires. He used the softer of the two options, the C5, to good effect in the final hour of track time, setting his best marker on his 110th lap of the day.

In a change to the previously scheduled order, the final two days of testing will see Grosjean and Magnussen share the driving duties each day, starting Thursday with Magnussen running the morning and Grosjean the afternoon. Grosjean will then drive Friday morning with Magnussen concluding testing that afternoon.

Romain Grosjean: "It's been a good day with a fair number of laps. We had a bit of a slow start in the morning, but then we got into it, we did the program we wanted. I drove the car in different conditions. It still feels really good, it reacts very well. There are a lot of things we're improving day-after-day. The team's doing a great job and I feel we're headed in the right direction. I'm looking forward to getting more laps in this week."

Guenther Steiner: "It was another good day of testing. We enjoyed quite a bit of running, we got more than 100 laps which is always good. I think we're making up for all the time we lost last week. We're learning, trying to find out what the tires are doing, and what we need to do on the set-up. A couple more days like this and we'll be ready for Melbourne."

Carlos completed his highest number of testing laps so far in the McLaren MCL34, as the team carried out a number of qualifying and race simulation runs, as well as aero and set-up work.

The morning session was disrupted briefly by a loss of water pressure, leading Carlos to stop shortly after exiting the pit-lane, after which the car was wheeled back to the garage. Despite this, and a substantial red flag period caused by another car, the team was able to execute its test programme as planned.

Lando returns to the cockpit tomorrow to make his final preparations for the Australian Grand Prix in two-and-a-half weeks' time.

Carlos Sainz: "It's been a good day of work. We managed to do a lot of laps again today and more or less a full race simulation. There are still a few niggles and stoppages that we wish we didn't have, but every time we go out on track we're a bit more reliable and we keep moving in the right direction. Overall, I'm happy that we made the most of the time on track today.

"The timesheets still aren't important. We're only focused on our run plans and tests, rather than wasting our energy on trying to calculate where we're at compared to the others. Once we see what everyone else brings in Australia we'll be in a better position to compare our performance.

"For the moment, I'll look back over these six days with my engineers, what I liked, what I didn't like, and try to put together the best compromise for my last day in the car on Friday."

Gil de Ferran, Sporting Director: "As this has been the most laps Carlos has completed on one day during this year's pre-season tests – and very nearly the most of any day – this will qualify as one of the most fruitful days yet. It's also been one of the hottest days so far, which has provided us with useful and more representative data.

"I'd love to declare that this was an issue-free day, however we're still contending with some small challenges. On the positive side, our knowledge of the car's behaviour, our drivers, the Renault power unit and the new Pirelli tyres continues to expand.

"Carlos' acclimatisation into the team is progressing well. We look forward to the last two days of testing before Australia to complete our final preparations, in which we still have an extensive programme to cover."