Sainz sets the pace as testing moves up a gear 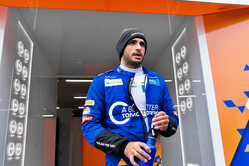 Despite the fact that we were half a man down - of which more later - today saw testing move up a gear as we reach the most critical stage before the circus heads down under for the season opener.

Despite the stop-start nature of this afternoon's running, and the forty minutes lost this morning, more laps were completed today than on any of the previous five days of testing.

In total the 13 drivers completed 1,157 laps, despite the fact that Max Verstappen was restricted to his garage for two hours, as was Nico Hulkenberg and Charles Leclerc only managed one late installation lap following his teammate's crash earlier.

While this morning was dominated by Sebastian Vettel's crash at T2, the cause of which is still being investigated by Ferrari, this afternoon was very much a typical test session, with some drivers on race sims, others on lots of short runs and others on long runs. Add in practice starts and pit stops and it was very much the stop-start nature we have grown used to over the years.

Indeed, it was only late this afternoon when a number of drivers finally opted to go for a time, if only to break the monotony, that the session sprang to life, even then so anonymous were some drivers this afternoon - we mean you Mr World Champion - it was hard to believe they were really out there.

As was the case yesterday, a McLaren tops the timesheets, much like Toro Rosso did last week. Even though Carlos Sainz didn't improve on the time posted this morning, he did complete another 74 laps however, thereby becoming one of seven drivers to exceed the magical 100 mark. That said, the Woking outfit readily admits that it encountered a number of "small issues" over the course of the day.

"It's been a good day of work," said the Spaniard. "We managed to do a lot of laps again today and more or less a full race simulation. There are still a few niggles and stoppages that we wish we didn't have, but every time we go out on track we're a bit more reliable and we keep moving in the right direction. Overall, I'm happy that we made the most of the time on track today.

"The timesheets still aren't important. We're only focused on our run plans and tests, rather than wasting our energy on trying to calculate where we're at compared to the others. Once we see what everyone else brings in Australia we'll be in a better position to compare our performance.

"For the moment, I'll look back over these six days with my engineers, what I liked, what I didn't like, and try to put together the best compromise for my last day in the car on Friday."

One of the late improvers was Sergio Perez in the Racing Point, the Mexican completing 88 laps on his way to posting a best time 0.698s off Sainz' best. That said, the Racing Point driver, like Grosjean and Kubica, posted his best time on the C5 rubber, with the car's balance said to be the main ussie facing the Silverstone-based outfit..

"It was a good day," said the Mexican, "even though we had a bit of a slow start. We had a couple of small issues here and there and the red flags didn't help, but in the end we finished the day with plenty of information.

"We were able to finally try some long runs after being pretty limited on mileage last week. We got to try the softer compounds of the Pirelli range and I was happy about the grip they offer. I had a good feeling with them and I hope we get to use them often this season, because they should work well on the majority of tracks.

"I am looking forward to a good, trouble-free final day on the car on Friday," he concluded, "so that I can then prepare myself well before we head to Melbourne."

While Leclerc was restricted to one install lap just 8 minutes before close of play, Vettel's 18.195 from this morning ensured third place on the sheets for the Scuderia.

"Clearly, we have not done as much running as we would have liked", said Vettel. "But I'd still say I'm getting a positive feeling from the car. Last week was definitely productive as we completed a lot of mileage and also yesterday, we were able to make up for the track time lost in the morning.

"As for the accident," continued the German, "I was going into Turn 3 and I had a feeling there was an issue with the front left corner of the car and from then on, there was nothing I could do to avoid the impact. The good thing is I am totally fine and, by the end of the day, thanks to a great job from the mechanics, we even managed to get the car back on track."

Kimi Raikkonen was another late improver, the Finn finishing just 0.014s off his former teammate's pace and with another 113 laps on the car which many believe will be the class of the midfield this season.

That said, in the moments after the chequered flag that marked the end of the day, the Alfa stopped on track just after T6.

"We went through the planned programme and made some more progress today," said the Finn. "The team is motivated and working well together. I look forward to being back in the car on Friday for my last day of testing before we head out to the first race of the season."

It was a better day for Haas which had Romain Grosjean on duty. The Frenchman completed 120 laps and was only marginally slower than the Alfa, albeit on a softer tyre. The American outfit admits that it still needs to understand what its tyres are doing.

"It's been a good day with a fair number of laps," said the Frenchman. "We had a bit of a slow start in the morning, but then we got into it, we did the program we wanted. I drove the car in different conditions. It still feels really good, it reacts very well. There are a lot of things we're improving day-after-day.

"The team's doing a great job and I feel we're headed in the right direction. I'm looking forward to getting more laps in this week."

Following a strong morning, Max Verstappen lost around two hours of running this afternoon and as a result didn't appear until there were twenty minutes remaining.

The team hasn't said what the problem was, but even with those two missing hours the Dutchman completed a very respectable 128 laps - some of which were run on tyres other than his favourite C3s.

An anonymous morning was followed by an equally anonymous afternoon at Toro Rosso where Daniil Kvyat completed 101 laps, even if nobody actually saw him do it. Like a number of its rivals, the Faenza outfit encountered some "small issues" over the course of the day.

"I would say we had a decent day of running," said the Russian, "we ran some useful test items and got some good laps on the board.

"Of course, you always want to do a few more laps but we had a couple of small issues here and there, it wasn't anything major, although the time adds up. In the end, it was a productive day and that's the most important thing, we got to test many useful items so now we'll focus on the next day of testing.

"You can't look too much into the timesheets as everyone is on a different programme of testing but I'm feeling quite comfortable with the car. We got through almost everything we wanted to test today and we have a lot of useful data that I'll go through together with my engineers.

"I have one more day left in the car and we will make the most out of it before heading to Melbourne."

Still to show its hand, and at a time some sections of the media are actually using the word "crisis", Mercedes completed 176 laps today, with Valtteri Bottas and Lewis Hamilton separated by just 0.002s.

Like Verstappen, the Silver Arrows seem determined not to abandon their favourite C3 tyres, though in truth both have run on other compounds over the course of the test.

In terms of tyres, the W10 suffered graining during Hamilton's race sim, tech boss James Allison admitting that this is something that needs to be worked on.

"It was a positive day," said Bottas, "we did 74 laps this morning, focusing on set-up work and making some good progress. There's a lot of data for us to go through tonight to further improve our set-up and make sure we come up with the optimal programme for tomorrow. We learned a lot today and we will make sure to learn a lot again tomorrow."

"We got a lot of laps today which is a good thing," added Hamilton, "but we've come across a few little hurdles, so we're just working our way through them, trying to be as diligent as possible trying to understand the causes - which is exactly what testing is for. Everyone is working flat-out and I'm sure we will get there. You need days like this to be able to bring light to the things that we need to work on."