Hamilton charge shows Ferrari has a fight on its hands 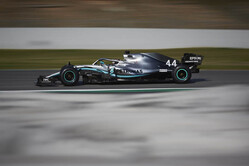 Before those predictable "what we've learned from testing" and "the questions that testing didn't answer" headlines begin appearing -and they will - we have a question of our own.

Seriously, after 64 hours of running will that single extra lap - in falling temperatures and fading light - really supply any further data of any note?

Yet that's what we got tonight, the last day of pre-season testing. After Kevin Magnussen stopped on track fourteen minutes from the end of the session, out came the red flag.

When the lights went green again there were just two minutes of pre-season testing remaining, barely enough time to make a cup of tea, yet Lewis Hamilton, Nico Hulkenberg and Daniil Kvyat all felt the need to go out and do that one lap.

Much like yesterday, it was a day of two halves, performance in the morning and all the tedious stuff in the afternoon.

That said, Hamilton livened things up, and in doing so ramped up the excitement factor ahead of the season opener in two weeks' time.

Almost ninety minutes into the session, this morning's pace-setter, and the quickest man at Barcelona to date this year, Sebastian Vettel, ground to a halt at Turn 2, causing the first red flag of the day.

Ferrari subsequently revealed that the SF90 had suffered an electrics issue and as it would take too long to fix the German would not be appearing again. A pain, but with fastest lap and 110 laps under his belt we can't imagine Seb being too disappointed.

Moments before, Red Bull confirmed that the RB15 had a "gearbox issue", and didn't anticipate Max Verstappen heading out any time soon. In fact, the RB15 didn't appear again, thereby depriving us all of the prospect of seeing Verstappen stretch the car's legs.

"The guys in the garage did an amazing job to turn the car around after yesterday's crash and get it on track this morning," said the youngster, "but unfortunately we had a gearbox issue and the nature of it meant we had to stop.

"I think overall we've had a really positive test here," he added. "If you look at the longer runs it looks pretty promising. I think we have a good package and the engine works really well, so I'm very happy and I'm looking forward to just going racing now."

Meanwhile, the long runs were underway, and one by one the likes of Kvyat, Raikkonen and Perez joined Vettel in passing the 100 lap mark.

Also seemingly focussing on the long-run stuff, from out of nowhere Hamilton joined the 1:16 Club, the Briton stopping the clock at 16.628 to go third, albeit on unmarked tyres.

As Robert Kubica finally headed out following an extended stay in the Williams garage, Hamilton headed out again, this time on clearly marked C5s.

A Personal Best in S2 was followed by the quickest S3 to date, the Mercedes crossing the line at 16.224.

Just a couple of hours after Hamilton had told reporters that the Ferrari has an 0.5s advantage over the Mercedes, the Briton fell just 0.003s short of knocking Vettel from the top of the timesheets.

Game on! As they say.

"The last couple of days have been very positive," said Hamilton. "It felt like the changes we were making helped us progress and gave us clear feedback of when we were moving in the right or the wrong direction.

"Today, it was nice to feel the car on lighter fuel and to discover it a little better," he added, "I really enjoyed the day and got a good feel for the tyres as well.

"I'm not the biggest fan of testing, as everybody knows, but it has been a positive week overall. Even so, there is still a lot to do and we are not there yet; there are lots of areas that we are working on and we are heading in the right direction."

"We've used our time on track here in Barcelona efficiently," added Bottas, "learning a lot and improving our performance over the past two weeks. We've also learned that the competition is going to be very, very tough this year, but we're looking forward to the challenge.

"We need to keep pushing and find more performance if we want to be competitive in Melbourne, but we have a strong team and have made good progress in the last days. We have a few days left to work on the car, so we will give it everything. I'm looking forward to Melbourne!"

Shortly after, Hulkenberg posted a 16.843 to go fourth, at which point Hamilton headed out again, the W10 fitted with another set of shiny new C5s. This time he failed to improve.

Meanwhile, as Robert Kubica seemed determined to set a record for the most practice pit stops - the Pole completing more single lap runs than should be allowed, just as Magnussen looked set to pass the 100 laps mark - quite a feat considering he is only driving this afternoon - the Haas ground to a halt at Turn 4, bringing out the red flag that essentially brought testing to an end.

While Haas put Magnussen's stoppage down to "little issues", the reason for Kubica's stop-start afternoon was, to put it frankly, odd, though, sadly, in keeping with Williams current situation.

"The long running in the afternoon was unfortunately brought to a halt because a number of critical bodywork parts had reached a stage of degradation that meant that we were no longer learning useful information from the car nor indeed for Robert," explained Paddy Lowe. "So we decided to switch our time to those final race procedural practices (starts, pit stops etc.) that we need to do before Australia."

"It is a pity to end testing with a difficult day before we head to the first race," admitted Kubica. "Out of the runs that we did, we managed to learn some things, but it hasn't given me the level of confidence that I would have liked ahead of Australia.

"It wasn't the day that I was hoping for after the delay to the start of testing," he admitted, "but you have to take the positives out of these difficult situations.

In total the Mercedes completed 132 laps, the same as Raikkonen in the Alfa Romeo, while the Haas completed 167 and the Renault just 103.

It was a bitterly disappointing day for Red Bull, with just 29 laps on the board and no opportunity to run the C5s, while Sergio Perez put another 103 laps on the Racing Point.

"It's been a positive final day in the car for me," said the Mexican. "We did a lot of work and I think we have a good idea of where we stand with the car.

"Today was about final race preparations with lots of long runs," he continued. "Every time we go out, we learn more and more and I feel ready for the season ahead. It's been a long winter and I'm extremely motivated: I can't wait to go racing again. Starting the season with some points would be good, but in the end it's a long season so we need to get to Melbourne and see how we really compare to the other teams."

"We've had quite a successful pre-season test," said Daniil Kvyat. "We were able to complete many laps, so I think we can be satisfied with the work put into these past two weeks.

"We did our homework between the two tests which is important, and that resulted in the car being comfortable to drive by the end of the second week. We tried some new bits and different setup approaches to see how the car would react as it's testing, because trying this during a race weekend would be too risky and time consuming. We evaluated these items and found solutions to make the car as quick as it could be, so I would say we made the most out of winter testing.

"Today we did some short runs and qualifying simulations in the morning, while in the afternoon we moved to a race simulation. Both went quite well, so now we can focus our attention to the start of the season in Melbourne."