Vettel throws down the gauntlet 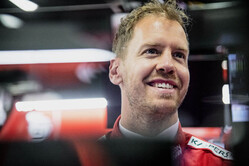 For a while it appeared that were playing with us.

In conditions warmer and brighter than previous mornings, the air and track temperatures finally reaching double figures, Robert Kubica was first out for the final day of testing before Melbourne.

Much like yesterday, we were treated to an early display of bragging rights, Romain Grosjean taking the initial honours in the Haas.

Round about the time Daniel Ricciardo was posting his first time of the day, former teammate Max Verstappen made his first appearance in the Red Bull RB15 which had been repaired following yesterday's crash.

With the team having to use a number of older parts, including the bargeboard used prior to Thursday, Verstappen completed the fewest number of laps over the course of the morning, though it is unclear why.

Once again it was a morning of stopping and starting, practice starts, practice pit stops and short runs.

Shortly after Kimi Raikkonen had experienced a major wobble in T2, countryman Valtteri Bottas took a leaf out of Lewis Hamilton's book a threw the opposition a bone, going quickest with a 17.101 on a brand new set of C4s.

This was soon eclipsed by previous pace-setter Carlos Sainz, who posted a 16.913, only, unlike Hamilton, for Bottas to throw another bone in the shape of a 16.960, the first time a Mercedes has broken the 1:16s barrier this year.

Amidst improvements from Verstappen, Ricciardo and Kubica, Sebastian Vettel refused to bite, opting to continue with his own programme rather than play silly games with the likes of Bottas.

Indeed, as the German completed his 36th lap of the morning, he appeared quite content and in no need to pick up the Bottas gauntlet.

As Raikkonen improved to fifth, and despite being slightly impeded by Grosjean, Vettel then banged in a 16.352 to put Bottas in his place.

In the final moments of the session, the German looked set to try and lower the bar still further, but out came the red flag when Kimi Raikkonen stopped at T2.

In addition to being at the right end of the timesheets, Bottas, on his last morning in the car, completed the second most laps (71), behind Grosjean (73) but ahead of Vettel (68). Other than Verstappen (29), Perez has only completed 36 laps.

Behind the Ferrari and Mercedes, Kvyat, Sainz, Grosjean, Ricciardo and Raikkonen are covered by just 0.341s, the midfield looking to be as competitive as ever.

Going into this afternoon, when Lewis Hamilton will take over the Mercedes, one wonders whether the battle for timesheet supremacy will continue or race simulations will be the order of the (final) day.

Will those numerous questions finally be answered? What will we have learned from the second test? Let's wait and see.