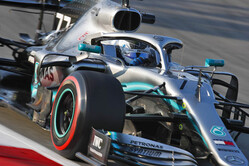 In recent years there's been much talk of what Lewis Hamilton will do when he finally decides to hang up his helmet after securing his sixth or seventh title.

Having already made ventures into the fashion world, he has also made no secret of his desire to get seriously involved in music, and while his talent in these fields is unclear, his contacts book will be bulging, which always helps.

However, another avenue he should seriously consider is acting.

Thus far, other than lending his voice to the likes of the Cars animation franchise, and a couple of video game appearances, there has also been the awkward cameo in Zoolander 2.

Based on his performances in recent years however, particularly the weeks leading up to yesterday's qualifying session, it is clear the boy has talent, his insistence that Mercedes was on the back foot and denials that such claims were bullshit, a masterclass of which Sir Larry himself would have been proud.

Fact is, his 0.704s gap to Sebastian Vettel in qualifying is greater than the 0.664s gap to Kimi Raikkonen twelve months ago, the Finn having qualified on the front row alongside the Briton.

And while we're handing out the F1 Oscars, surely Toto Wolff deserves one, or at least one of those meaningless Lifetime Achievement awards that have become all the rage these days.

And to think we were finally beginning to believe those underdog claims.

Or is it because we wanted to believe them?

Last year, of course, despite taking pole Hamilton lost out to Vettel, the German benefitting from Mercedes strategic error. While it is quite possible that something similar could happen today, the fact is that even at this early stage of the year, Mercedes is on course to continue where it left off last November.

Much like the infamous F1 Timing App - of which more later - despite the assurances that things had improved, the feedback listened to, Ferrari is once again looking set to spend the season playing catch-up.

Valtteri Bottas was blistering in Q3, but once again his teammate was remorseless, needing to crush the Finn just the same as he had to destroy all other pretenders to his crown.

As in 2018, Charles Leclerc was quick to admit to his mistake, the youngster starting from fifth today, alongside the infamous Romain Grosjean and just ahead of the equally infamous Kevin Magnussen. And just to ensure the Monegasque is kept on his toes, he has his teammate and Max Verstappen just ahead.

At a time we ponder the failure to learn from one's mistakes, one wonders if Sebastian is going to encounter any black holes on the opening lap, thereby adding to the growing sense of déjà vu surrounding Ferrari at present.

Verstappen did well to split the Ferraris, while teammate Gasly was eliminated in Q1 courtesy of a strategic error. If nothing else, it will afford us the opportunity, at this early stage of the season, to see how quickly the Frenchman can slice his way through the field, an art that his teammate mastered some time ago.

Haas was the big surprise - to use Vettel's favourite word - in qualifying, and while the performance will only add to Cyril Abiteboul's anger - doesn't everything - one can only hope that Rich Energy appreciates the bang it is getting for its bucks.

Whatever happens out front today, the fun and games is going to be the midfield, which is not only to be looking more volatile than last year, but appears to have the added excitement of some interesting disparity - and thereby rivalry - between teammates.

The five drivers that failed to make it through Q2 - Hulkenberg, Ricciardo, Albon, Giovinazzi and Kvyat - were covered by just 0.212s, while Stroll and Sainz, both victims of traffic - would have otherwise been right in the mix.

Particular credit goes to Lando Norris and Alexander Albon, both out-performing their teammates in their maiden qualifying session, the Briton doing particularly well to give McLaren its best start position in Melbourne since 2014.

However, on a day we celebrate the acting skills of Hamilton, the patience of Vettel and the likelihood of a season of midfield fighting and in-fighting, how sad to see that there is no quick-fix to Williams issues, George Russell admitting that an inherent issue on the FW42 will take "months" to resolve.

Indeed, if the youngster is truly the successor to Hamilton, perhaps George is trying to tell us that the season is already over for the Grove outfit.

Last year's race featured just five overtakes, and it was this, on top of the fact that overtaking in 2017 was 50% down on 2016, that led to new rules being hastily introduced for this season.

Melbourne being notorious for its overtaking opportunities, it will at least be interesting to see if the cars can follow more closely - which is the intention - and whether last year's dismal count can be beaten. Indeed, by rights, Gasly should beat it single-handed.

Talking of last year, following that superb qualifying performance, Haas will be only too aware that it was seemingly destined for a good points haul in 2018, until it all went wrong during the pit stops.

The American team has been practising its pit stops over the winter, just in case, but even so we imagine that there will be a Netflix crew on hand today, while on the pit-wall Guenther Steiner will have an extra-large swear box in front of him.

In terms of tyres, the quickest strategy for what has become a traditional one-stop race is actually a two stopper: two stints on the soft tyre of 21 laps each, followed by a shorter 16-lap final stint on the medium.

However, in practice, the teams are more likely to stick with the one-stopper, which is extremely close in terms of overall time anyway and carries less risk, especially as we know Albert Park is not so easy to overtake on. The optimal one-stop strategy is to start on the soft tyre for 27 laps, then run 31 laps on the medium tyre to the end.

Close to that is an alternative one stopper: start on the soft tyre for 24 laps, then go for 34 laps on the hard to the flag.

A couple of hours before the race, the drivers gathered for the traditional new term photo. However, this year they were subsequently joined by the team bosses and F1 and FIA officials for a special tribute to Charlie Whiting who passed away on Thursday. Ahead of the race there will be a one-minute silence in tribute to the popular former FIA race director and race starter and also the victims of the terror attack in New Zealand.

Four of the last five Australian Grands Prix have witnessed the appearance of the safety car, and with a number of rookies, drivers out of position, drivers known for their 'over enthusiasm' and those known for their in-built attraction to black holes, there is every chance we will witness its emergence again this year.

And talking of history, the pole-sitter has only won here once in the last seven years... Hamilton starting from pole for the last six of those races.

The field heads off on the warm-up lap All are on softs bar Giovinazzi, Kvyat, Stroll, Gasly and Russell who start on mediums and Kubica who is on hards.

They're away, and Bottas makes a blistering start, and as they head into T1 he is ahead of his teammate, who has Vettel and Verstappen on the inside and Leclerc on the outside.

Further back, Ricciardo is running along on the grass, after appearing to be force wide by Perez, and in the process loses his front wing. He does brilliantly to slow the car and not cause carnage at the first corner where he could well have T-boned the latter end of the pack.

Vettel and Leclerc are side by side exiting T1 into T2, but the German holds off the youngster, forcing him wide, while Verstappen goes intentionally wide around the outside, just in case, managing to re-take fourth from the Monegasque.

As the dust settles - for Ricciardo literally - Leclerc is under pressure from the Haas duo, the youngster having lost ground following his close encounter with his teammate.