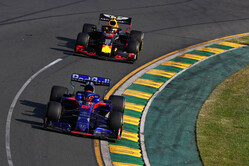 Always a difficult track on which to take, it would be wrong to assess the impact of the new aero regulations on yesterday's season opener alone. Indeed, it was in the wake of last year's race - which featured just five passes - that the sport's powers-that-be introduced the changes.

And while - not for the first time - Max Verstappen produced arguably the move of the race with his pass on Sebastian Vettel, there was also Lando Norris' bold move on Antonio Giovinazzi.

On the other hand, other than (ahem), Charles Leclerc holding station behind Sebastian Vettel, there was the obvious frustration of Pierre Gasly being unable to pass Daniil Kvyat, which, if nothing else, allowed the Russian some well-deserved personal satisfaction.

Asked their opinion at race end whether the new aero regulations make following a car any easier, the three podium finishers appeared to be in agreement.

"Ask Valtteri how it was following!" joked Verstappen.

"No different," said Lewis Hamilton, who, when asked if he really felt there was no improvement on previous season, again said: "No!"

"I had no chance to get by," said Verstappen, of his desire to pass Hamilton for second. "It is still very hard.

"The only positive thing what we improved is the DRS effect," he added. "So, as soon as it opens, it's a lot more powerful than last year but following is still a lot of turbulence."

Out front for the entire race, asked if he noticed a difference when encountering traffic, Bottas admitted: "It was quite... I didn't get close enough to traffic ahead to really see a difference."