"We still have to work hard," admits upbeat Verstappen 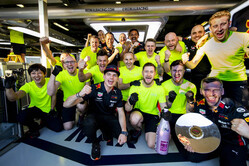 A typically cheeky tweet from Red Bull in the moments following today's race, aimed at a number of different parties, will no doubt have had the desired effect.

Twelve months after Fernando Alonso tweeted "now we can fight", after finishing fifth in the season opener, his first race in a McLaren powered by Renault since dropping Honda, Red Bull took to social media following Max Verstappen's drive to third in a Honda-powered Red Bull.

"Now we can fight!" declared the Austrian team, alongside a winking emoticon, "P3 for Max Verstappen in Melbourne secures a first podium for Honda since the 2008 British Grand Prix."

Ouch! As they say.

"For us to get a podium first race with a new power unit is a dream start," said Christian Horner. "It's a fantastic performance, they have given us a great product over the winter and the engine is delivering good power, it has been reliable.

"Max has been able to use that to really good effect today," he continued. "To put Lewis under pressure for pretty much fifty-percent of the grand prix.

"I thought we had the quicker car than him, certainly in the second half," he added, "at this venue this is really encouraging for us. I think we've got a good basis from which to start and develop this car."

"As soon as I got onto the medium tyres the car felt really good," said Verstappen. "I had really good balance and I was just slowly pushing up to Vettel.

"As soon as I had the opportunity to go for it, I went for it, and luckily it paid off. Then I drove to Lewis, but in general he just had a little bit more pace than Seb. I think we were faster than him but at this track it's just so hard to get past."

Asked specifically about the pace of the Honda, he said: "I could at least have a go at it in terms of top speed. It's good progress, there's a lot of positive things coming.

"Valtteri was very far ahead," he admitted, "still, it was a good result today but we still have to work hard to improve.

"If I just compared top speeds against the other two teams, I'm very pleased with that," he said. "Also, I think in general the engine has been performing very well without any issues. I guess time will tell if we can fight for top spot.

"Trying to challenge for second was a very positive feeling, especially after my Friday," he admitted, referring to the RB15's lack of pace at the start of the weekend. "We couldn't pull it off, but in general I'm very happy. We managed to turn it around in a very positive way after Friday, and for Honda to have their first podium in the V6 era, I think it's a great start. So, a big congrats to them."