"He was our man," says Vettel of Whiting 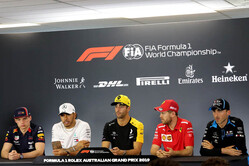 Even at this darkest of times, following news of Charlie Whiting's sudden death aged just 66, it is impossible not to smile at the thought of that infamous moment back in 2016, when, during the Mexican Grand Prix, outraged at what he considered the leniency the race director was showing to Max Verstappen, Sebastian Vettel said that he had a message for the man...

At today's official press conference, clearly still in shock, Vettel lead the tributes to Whiting, revealing that he had shared a track walk with him twenty-four hours earlier.

"I guess I was as shocked as we all still are now," said the German, "especially since I spoke to him yesterday and walked the track for the first couple of corners together with him.

"It's difficult to grasp when somebody is not there anymore," he added. "I have known him for a long time and he has been our man, the drivers' man.

"Obviously there are regulations and all that, and then there is us, and he was the middle man. Someone could ask anything at any time, he was open to everyone and his door was always open. He was a racer and a very nice guy."

"It was not the nicest news to walk in to," added Daniel Ricciardo. "He was there for us and we gave him a hard time, we really pressed him and pushed him and made him work, but he was always really receptive. You always felt like he was on our side.

"I remember my first Aussie GP in 2012, going up with Franz, he said go and introduce yourself to Charlie, start of a new season, go and start the relationship on a good note. Time goes fast."

"It was a big shock," said Max Verstappen. "I spent the day with him in Geneva a few weeks ago and we had a good chat about a lot of things. It's unbelievable.

Recalling Whiting's age, the Dutch youngster continued: "I guess we just have to appreciate every day and enjoy life, it's not only about Formula One but all the other things in life. His thoughts go to his family, friends and close ones."

"Incredibly shocked this morning to hear the sad news," said Lewis Hamilton. "My thoughts and prayers are with his family.

"What he did for this sport, his commitment, he really was a pillar and such an iconic figure in the sporting world," said Robert Kubica. "He contributed so much to us. May he rest in peace."

It is a hard moment," he continued. "I saw Sebastian walking with Charlie yesterday. I thought I would not interrupt them because I would see him on Friday at the drivers' briefing, which will not be the case. It is very sad.

"He was a kind of icon of F1, but not only F1. He was, as Seb said, a racer, but also keeping up with everything in the regulations. And he was really kind of a person who you could always trust and commit with. It is a very sad moment."