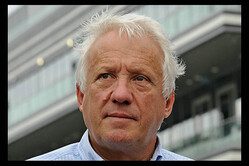 Formula One was rocked today by the news that on the eve of the season opener in Melbourne, Charlie Whiting, the sport's race director, official starter and the overseer of most of the sport's rules, had passed away.

"Charlie Whiting, has sadly passed away this morning (14 March 2019), in Melbourne, aged 66, as the result of a pulmonary embolism, three days before the Australian Grand Prix which will open the F1 season," said the FIA in a brief statement.

"He began his F1 career in 1977 working at the Hesketh team, then in the 1980s at Brabham. He has been an integral part of the organisation of the FIA Formula One World Championship since he joined the Federation in 1988, and has been the Race Director since 1997."

“It is with immense sadness that I learned of Charlie's sudden passing," said FIA president, Jean Todt. "I have known Charlie Whiting for many years and he has been a great Race Director, a central and inimitable figure in Formula One who embodied the ethics and spirit of this fantastic sport.

"Formula 1 has lost a faithful friend and a charismatic ambassador in Charlie," said Ross Brawn, who has worked with Whiting in his various roles as a mechanic, technical director, team boss and now F1 technical boss. "All my thoughts, those of the FIA and entire motor sport community go out to his family, friends, and all Formula One lovers."

"I have known Charlie for all of my racing life. We worked as mechanics together, became friends and spent so much time together at race tracks across the world.

"I was filled with immense sadness when I heard the tragic news. I'm devastated. It is a great loss not only for me personally but also the entire Formula 1 family, the FIA and motorsport as a whole. All our thoughts go out to his family."

Red Bull was among the first teams to respond to the sad news, Christian Horner saying: “I am deeply saddened to hear the terrible news that Charlie Whiting passed away last night.

"Charlie has played a key role in this sport and has been the referee and voice of reason as Race Director for many years. He was a man with great integrity who performed a difficult role in a balanced way. At heart, he was a racer with his origins stretching back to his time at Hesketh and the early days of Brabham.

"On behalf of everyone at Aston Martin Red Bull Racing we pass on our sincere condolences to his family and friends. Charlie was a great man who will be sadly missed by the entire Formula 1 paddock and the wider motorsport community."

"I was shocked and saddened to hear the news of Charlie's passing this morning," said Toto Wolff. "He was a pillar of our Formula One family, balanced in his approach, subtle in his understanding and always with the interests of Formula One as his main focus.

"He was a fantastic ambassador for our sport and a true guardian of its best interests; all of us who were lucky enough to know him will miss his ready smile and gentle humour. On behalf of the entire Mercedes motorsport family, I send our deepest sympathies to his family and friends."

One of the sport's old guard, Whiting worked with Bernie Ecclestone during his Brabham days, joining the team in 1977 from Hesketh, having previously worked in F5000. At Brabham, first as chief mechanic and then chief engineer, he was instrumental in Nelson Piquet's title wins in 1981 and 1983.

As Ecclestone moved on to bigger things, Whiting continued to play a central part in the sport's hierarchy, albeit with the FIA, which he joined in 1988, initially as technical director.

In 1997 he was appointed Race Director, Official Starter and Safety Delegate Head of Formula One Technical Department, and in 2017, FIA Director of F1.

Whiting became a driving force in terms of safety and was instrumental in introducing the Halo device.

Widely regarded as part of the 'old guard', Whiting's loss comes at a crucial time for the sport as it attempts to provide an acceptable rules package for 2021.

While many of the old guard have been replaced or moved on since the sport was bought out in early 2017 by Liberty Media, Whiting's role was never in doubt, all sides aware of his vast experience and his ability to work with everyone. His passing leaves a major void for the sport and its powers-that-be to fill.

On behalf of its readers, Pitpass offers its own sincere condolences to Charlie's family at this sad time.