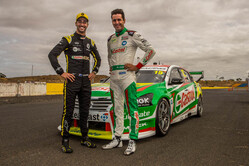 Ahead of his F1 race debut for Renault, Daniel Ricciardo today drove the #15 Supercar for several laps at Calder Park Raceway as he prepared for the opening round of the Formula One season at Albert Park this weekend.

This was Ricciardo's first taste of a Supercar in current specification equipment, an activity brought together by his and Rick Kelly's team sponsor, Castrol.

In cold conditions at the former Supercars Championship venue, Kelly provided Ricciardo a full rundown of his cockpit before being let loose in the 635+ horsepower Supercar.

While Formula One and a Supercar are two completely different beasts, the seven-time grand prix winner jumped out of the touring car impressed with its performance.

"Awesome, it was actually really good," said Ricciardo. "I expected it to be good, it's not like I didn't expect it, but I've never really driven any serious race car with a roof on it, it's always been formula cars, so I didn't really know what to expect either. 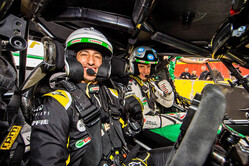 "At the end of the day, it's the top level of racing so it's different obviously to formula cars," he continued, "the speeds and the style of the car, but it's still the top tier for tin top racing, as we call it, so I mean just everything, the car control.

"I've always loved Supercars for how close they race, the bit of bumping and just having that judgment at that speed is pretty cool.

"With F1, obviously we race close but you don't really get as much touching because just the way that the cars are built and they're a bit more, I guess, fragile, but for these guys to still be doing well over 200 kays and be pushing bumpers, it's good fun."

Kelly, who will regain the steering wheel of his car for this weekend's Supercars Melbourne 400, said he was impressed with Ricciardo, who got up to speed quickly.

"Normally you sit next to a driver and critique them a little bit," said Kelly who runs the Kelly Racing Supercar squad with brother Todd. "For me, it definitely wasn't the case; it was watching his inputs and learning from the way he went about it. 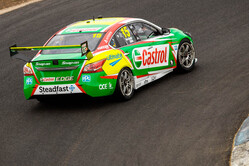 "He was very kind on the machinery, obviously, so shifting well and truly early and stuff like that, which was pretty nice of him.

"But to see the way he got in, went out, and did laps with me in the car with him, and then he stepped it up every single lap, just crept up on the brake markers and changed his inputs to improve every single lap, I mean, that's why he's the champion he is, and for me to sit next to him in the car and witness that first-hand was pretty special.

The Supercars Championship features on the support card for this weekend's Grand Prix, with the 24 drivers battling it out for points across the four races in the Melbourne 400.