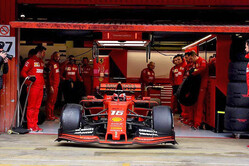 For as long as anyone can remember, unlike some, Ferrari has made no pretence in terms of team orders favouring its chosen driver, be it the infamous incident in Austria in 2002, or the "Fernando is faster than you" call to Felipe Massa just eight years later.

While Ferrari has already said that in the opening stages of the season, priority will be given to Sebastian Vettel, in "particular situations", team boss Mattia Binotto has said that there will be no attempt to stifle or handicap teammate Charles Leclerc, and that the youngster is free to race the German.

"It's normal, especially early in the season, that if there are particular situations our priority will be Sebastian," Binotto told reporters at the launch of the team's 2019 contender last month. "He is the guide with which we aim for the championship. But there's no prejudice, the absolute priority is for Ferrari to win.

"To have a driver pairing so competitive I think it's not a problem but an opportunity," he added. "Sebastian has little to prove, and he remains our guide. Charles still has to learn, as pointed out by himself, but we know how talented he is.

"Anyway, I hope to have this problem of having two drivers to manage among the top positions."

Speaking to reporters in Barcelona, as pre-season testing came to a close, a test which sees the Ferrari pair first and third on the overall timesheets, separated by just 0.010s - with Lewis Hamilton conveniently sandwiched between - Binotto was keen to clarify his previous comments and make clear that Leclerc is free to race.

"Obviously the two will be free to fight," said the Italian. "We will not ask Charles to go slow, or Sebastian to be faster. We need both of them to run to the maximum and try to do their best.

"But certainly if there is any ambiguous situation at the start of the season, Sebastian is the one who has got more experience," he added, "he has been with us many years, he has already won championships, so he is our champion."

With a mind on last season, when a number of races saw a certain amount of ambiguity in terms of tactics, Binotto believes it will benefit the team to prioritise Vettel to a certain extent.

"I think that it's good as well for Ferrari," he said. "When you've got your intentions clear from the start, at least you do not make mistakes when you have an ambiguous situation."

"Charles is a good driver, certainly a very fast driver," added the Italian, when asked about the youngster who continues to impress. "Here in Barcelona he focused himself on understanding the car, working with the new team and engineers.

"I don't think there was a relative battle on the track between the two," he continued. "More important for us is to understand the car. They've done very similar lap times, true, but I think that's demonstrating Charles is a good and fast driver.

"I think we knew that since the past. It's many years at Ferrari, and we've seen that in the Sauber last year also. I don't think Charles is a surprise in that respect. It's not the testing at Barcelona that is telling us that was the right choice. It was certainly the right choice but the season will tell us more."