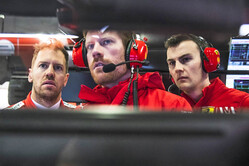 By way of one of those wonderful instances of F1 happenstance, round about the time that Lewis Hamilton was claiming that Ferrari has an 0.5s advantage over Mercedes, elsewhere in the paddock, the Maranello outfit's boss was dismissing all such talk.

Aside from the fact that the Briton was to subsequently post a best time just 0.003s of Sebastian Vettel's best, and 0.007s quicker than Charles Leclerc's, Binotto insists that heading to Melbourne, Ferrari does not have the advantage.

Indeed, around ninety minutes into the afternoon, Vettel suffered an electrics issue that brought the team's test to an early close.

"These days are very important in the preparation of the entire season," said Binotto. "I'm happy to know that Hamilton believes we are faster, I believe they are very strong, I believe Mercedes will be very, very strong in Australia.

"It would be completely wrong to think today that we're faster than them," he insisted. "Here, we may run different fuel levels, we've got different programmes.

I'm not expecting them to be behind us, or if they are they will be very, very close."

However, other than Vettel's subsequent electrics issue, the test has not been trouble-free, with Vettel crashing on Wednesday and Leclerc losing track time on Tuesday following a cooling issue.

"I'm pleased the car is behaving as expected, that's the starting point," he added. "But I know as well there are many issues to be addressed and performance to be pushed forward. Certainly the fact the car is running properly is a good starting point, but that's it."

Asked specifically about the SF90 in relation to its predecessor, he said: "The drivers have the confidence to attack the braking and the corners, but being here, balanced in Barcelona, doesn't mean it will be the same in all the circuits.

"Each single circuit has got different characteristics," he added. "Certainly it was balanced here, it was good, a driveable car. If there is any strength, I would say it's that."