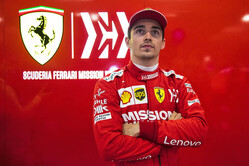 Having teased us all with one solitary quick lap that promoted him to the top of the timesheets, Lewis Hamilton subsequently returned to Mercedes no-nonsense programme of slightly longer runs.

Meanwhile, it was Charles Leclerc, running the SF90 that teammate Sebastian Vettel crashed yesterday, who gave us a glimpse of what might be this season, fitting a set of the softest C5 tyres he followed Alexander Albon's example in breaking the 1:16s barrier then went a full 0.651s quicker.

However, speaking to reporters, the Monegasque was keen to point out that we haven't yet seen the best of the Ferrari.

Asked if he could have gone quicker, the youngster smiled and replied: "We never know...

"Obviously I think as every team we are not flat-out," he continued. "There's still some margin, a bit in myself...

"I still have to learn," he added, "I get more comfortable with the car lap after lap and with the car itself, so it's looking good for now.

"The car feels comfortable," he admitted, "from day one the balance is pretty nice and it hasn't changed today, so it's a positive day. Especially after the lack of running yesterday. It's a good morning for us, and it's good to be on top, but it doesn't mean anything. It's testing.

"I think we are looking strong at the moment, but whether they are sandbagging more or less or whatsoever we don't know and we'll only know in qualifying but for now, we are pretty happy with the job we're doing."