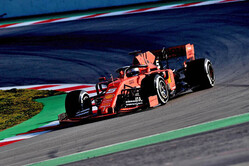 Team boss at Ferrari in the mid-70s while Niki Lauda was driving - and winning - for the Scuderia, and president of the Italian company during the all-conquering days of Michael Schumacher, Luca di Montezemolo admits that he is no fan of the livery the Maranello outfit's F1 cars are sporting this season.

Other than a change to the actual colour - which isn't the first time the Italian team has made such a move - the cars to be driven by Sebastian Vettel and Charles Leclerc this season have a matte finish, all part of the Mission Winnow programme of Phillip Morris.

This is somewhat ironic when you consider that it was in 1993, on his watch, that the American giant became the team's primary sponsor and the shade of red adorning the Maranello cars became noticeably lighter.

Speaking to TuttoSport, Montezemolo admits that he is not impressed by the new look.

"The Ferrari red, in my opinion, is sacred," he said, "it is a brand recognised across the world and therefore I do not really like it.

"It is like changing the colour of a flag," he continued, "and I am not convinced by the story that in doing so we have saved some weight."

However, the Italian grudgingly admits that "if this should lead to a long-awaited success, then I would be willing to put aside the sorrow for the colour.

"It's a bit like Schumacher's time when the then president of the Cossiga Republic told me: 'But how is it possible that he does not say a word in Italian?'," added Montezemolo. "I replied that if to win five world championships in a row you had to have a driver who did not speak Italian, I would certainly not be sorry."