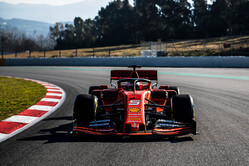 48 hours after Friday's unveiling at Maranello, Ferrari's 2019 contender, the SF90, was in action at Barcelona today as Sebastian Vettel and new teammate Charles Leclerc shook down the car ahead of the start of pre-season testing tomorrow.

As the Italian team took advantage of the filming day rules which allow limited running, Vettel did the bulk of the driving, with Leclerc making his debut in the new car towards the end of the day.

As per the filming day regulations, the car completed no more than a hundred kilometres, running on demonstration-run tyres.

The SF90 is back on track tomorrow, when the first of the pre-season tests begins at the Spanish circuit.

Vettel will drive the first day, alternating with Leclerc through to Thursday when the test ends. The second session, again in Barcelona, runs from 26 February to 1 March.