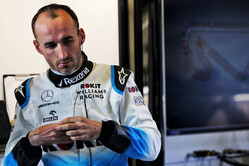 While the timesheets show Robert Kubica as having completed 90 laps on Friday, what they fail to mention is that the Pole completed 47 of these in the morning.

The afternoon saw the Pole running a stop/start programme that featured more stops than an 85-year-old incontinent on the M25 as Kubica completed endless single-lap runs that began with a practice start and ended with a practice pit stop.

"We planned an ambitious programme to mirror George's from yesterday," explained Paddy Lowe at session end. "This involved more data gathering in the early cool track conditions which we achieved very well, followed by some performance experiments and a qualifying simulation before lunch.

"The long running in the afternoon was unfortunately brought to a halt because a number of critical bodywork parts had reached a stage of degradation that meant that we were no longer learning useful information from the car nor indeed for Robert. So we decided to switch our time to those final race procedural practices (starts, pit stops etc.) that we need to do before Australia."

As a result, this combined with the fact that Williams missed the first two-and-a-half days of testing, means that the 567 laps (1,640 miles) completed over the course of the test is down 30.77% on 2018's tally of 819 laps (2,369 miles) - that subsequently saw Sergey Sirotkin qualify 19th in Melbourne and teammate Lance Stroll 14th.

"We lost another day today," sighed Kubica. "Of course we did some laps, but the car's state was far from optimal.

"We had some issues," he continued. "Unfortunately the car was not representative to what it should be, and this had a big impact on our test, our running programme of today. All the information was misleading and in some way also was difficult to get any information for Australia."

Like the failure to make it to the test in time, the lack of spare parts, just like the build of the FW42, is down to the team not being prepared following its "incredibly busy winter".

"I think we face a big delay, and some of today's issues is a consequence of being in a rush," said Kubica. "If you struggle to have a car for the week before, you struggle to have spare parts. And unfortunately today was required to have bits to replace, and we couldn't replace them. In the end we did maximum from what we have, but this maximum is not enough, because in the end the car was from optimal."