Lowe denies concern over his future at Williams 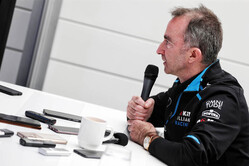 Whatever way one looks at it, it was dramatic, one minute he was technical boss with world champions Mercedes, then he was back with the team with which he had made his F1 debut as an control systems engineer in 1987, Williams.

When re-recruited by the Grove outfit, big things were expected of Lowe, who had joined McLaren in 1993 from Williams. progressing to the role of technical director in 2011 before replacing Ross Brawn at Mercedes in 2013.

However, rather than work a Midas touch at Grove, in Lowe's first full season, after returning in 2017, Williams slumped to bottom in the standings, its worst season in living memory.

Then came the debacle of Williams not having its 2019 contender ready for the start of pre-season testing last week, before eventually fielding a car on which there is clearly much work to do.

Even before the FW42 hit the track, there was speculation in the media, that at what some see as a time of crisis at Grove, Lowe might be among the first to pay the price and fall on his sword.

"I haven't paid attention to those sort of subjects in the media," He told reporters at Barcelona, when asked about the speculation over his role, as the FW42 enjoyed its best day to date in testing, George Russell completing 140 laps.

"I'm working very hard, there's an awful lot to do," he added. "We're working well as a team and at all levels in the company. I haven't got any concerns on that side."

However, in the wake of last year's pitiful performance, which has seen a number of sponsors desert the team, mostly for Silverstone-based rivals Racing Point, not to mention the various personnel restructures and departures, Williams cannot afford another season like 2018.

Britain’s most successful constructor, in terms of constructors' titles, Williams should be hard on the heels of Mercedes and Ferrari, not attempting to play catch-up with Haas.