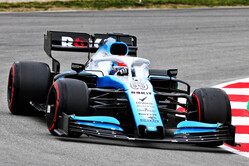 Having arrived at the Barcelona track at around 4 am, while rival teams began taking to the track just five hours later, the Williams crew was still working frantically in order to have the FW42 ready for its delayed test debut.

Hidden behind screens, other than the occasional high-pitched scream of an air gun and the various other clunks, clicks and bangs, the only other sign of life was mid-morning when the Mercedes engine in the back of the FW42 roared into life.

The car finally headed out shortly after the lunch break, and following an install lap, George Russell headed back to his garage where the team began checking that all was well.

While the post mortem on how this sorry state of affairs came about is on hold, team boss Claire Williams bravely faced the media, admitting that the situation was far from ideal, and had left her and the Grove outfit feeling embarrassed.

"It became apparent quite late on that we weren't going to make the shakedown and subsequent to that, not make the first day," she said. 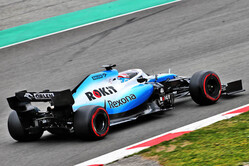 "We thought we could get everything that we needed together in order to make Tuesday," she continued, "but then parts just weren't coming through as we thought they would, or in the time that we had planned.

"So it transpired that we were not able to make it until today," she sighed, even though some observers suggests the Grove team could be worth a sports bet in terms of 'doing a Brawn', "but I am not going to into any detail as to why that happened. I don't think it's appropriate to discuss the ins and outs of what went wrong.

"Completing that inquest has not happened at Grove yet," she continued. "We're clearly aware of some of the issues, but it's too early in the day to discuss any of the detail, and it's probably something we wouldn't do anyway. We need to analyse what went wrong and then resolve it so it doesn't happen again.

"This is not a situation that we anticipated," she admitted, though those who enjoy betting on sports might disagree, "it's certainly not a situation that we ever wanted to find ourselves in. Clearly, we're not just disappointed, but it's embarrassing, not bringing a race car to the circuit when everyone else has managed to do that, particularly for a team like ours that has managed to bring a car to testing for the last 40-odd years."