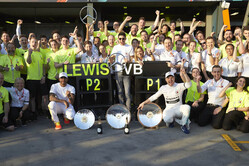 Taking the flag at the end of today's Australian Grand Prix, Valtteri Bottas had a message for the world; "to whom it may concern, f**** you!" he shouted.

While drivers are prone to outbursts in such times of high emotion, it was widely assumed, coming off the back of a season the Finn regarded as his worst ever, that he was hitting out at his own team for some of its decisions last year, not least the team orders debacle in Russia.

However, when asked to explain the message, Bottas insisted that it wasn’t aimed at anyone in particular, and was entirely spontaneous.

"It just came out," he insisted, "I just wanted to send my best regards... that's it... honestly, I didn't think about it or plan it, it just came out.

"Obviously there are many people who support you, and honestly I appreciate that a lot," he continued. "There are always ups and downs, and you can see the true support quite easily. Then through the difficult times there's the other part, which is a lot more negative. That's their weakness, so it's fine."

Asked if he felt some of the criticism he faced last season was uncalled for, even though he failed to win a single race and ended up fifth in the overall standings, he said: "I can't say unfair, because everyone can say what they really want. Just for whom it may concern, maybe they should look in the mirror sometimes and think actually why they do that. For me it's OK now."

However, pressed a little harder, he admitted: "It would be quite a long list, unfortunately, that's how it goes. I'm sure the people to who it was (aimed), would know it.

"In sport, and especially this sport, the confidence you get from the results is massive, and it can boost you a lot," he added. Even though there will be difficult times during every season, you always remember the good ones, and you get strength from knowing that you'll be able to do something, like today."