"It's not BS," insists Hamilton 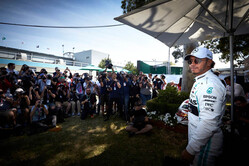 As ever, both Ferrari and Mercedes are being extremely cagey.

The German team, despite winning 74% of the races held under the hybrid formula, took up its default position of underdog in the wake of pre-season testing.

While, for much of testing Ferrari did indeed appear to have the edge, its pace strong and reliability only compromised by a couple of minor issues, no sooner had Hamilton said that he felt his car was around 0.5s off the pace than he went out and posted a best time just 0.010s shy of Sebastian Vettel's best.

Speaking ahead of this weekend's season opener in Melbourne, the Briton continues to insist that his Maranello rivals have the edge.

"It's not difficult to read it," he said of Mercedes pre-season form. "I think it was quite clear, however it's difficult to know what everyone's doing, so naturally we won't fully know until we get out in the car tomorrow and, come qualifying you get a better picture, and usually, over the first few races is when you really start to get an idea of where everyone stands... but we said that we have work to do and we weren't talking BS. We have work to do.

"After a test, you always improve the next day as the car gets older and older throughout the test," he added. !It wears and then you go away, you analyse where you've been. New information gets put in the wind tunnel, the engineers have new information and they work upon it. So, everyone takes a step after testing.

"he car will be fresher here, we'll have a much better understanding of it - but I think it's the same for everyone. We didn't bring upgrades. It will be interesting to see how the Red Bull upgrade works, and I know some other people, Ferrari usually bring an upgrade for the first race, so it'll be interesting to see."

One aspect he clearly takes strength from is the continuity in terms of retaining Valtteri Bottas as his teammate for a third season.

"Continuity is what works," he said. "We have a great pairing and I think the contribution Valtteri and I together, it's worked well for years and there's no reason to change it. If it ain't broke, don't fix it.

"In terms of the team, we've got so many incredible people within the team, and the energy... it's inspiring to see so many people so pumped, pulling together. The communication is better than ever. Just after the test I went back, and Toto rallied the troops and we all sat together and it's really impressive to see so many people so passionate about their jobs and so passionate about racing and wanting to do a better job and always wanting to improve. And knowing where they can improve - it's really, really cool to see. Really encouraging. I just know they're the soldiers. They're the real, true fighters within the team, and I know they're going to be giving absolutely everything to make sure that we continue to progress."