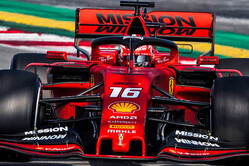 The recently updated official entry list for the 2019 Formula One World Championship season, as released by the FIA, showed three changes.

Other than the inclusion of SportPesa and ROKit as the title sponsors of Racing Point and Williams, the list revealed that Ferrari has reverted from Scuderia Ferrari Mission Winnow to plain old Scuderia Ferrari.

It was subsequently revealed that the Mission Winnow branding would be missing from the cars in Melbourne for the season opener, fans of the Italian team being told that they can instead expect a "nice surprise".

Yesterday however, as the authorities in Australia continue their investigation into whether it has breached the country's strict anti-tobacco advertising las, Mission Winnow, which also sponsors the Ducati MotoGP team, took to social media to insist that it remains title sponsor of Ferrari.

"We are here to stay," it tweeted. "Mission Winnow will remain the title partner of the Scuderia Ferrari team. The changes are currently planned only for Australia."

With the recently revealed partnership between McLaren and BAT (British American Tobacco) it is feared that in the age of vaping, such partnerships are merely a way for the tobacco giants to get back into F1 having been banned for over a decade.

The very strict anti-tobacco advertising laws have led to this weekend's move, but it remains to be seen how Ferrari, Mission Winnow - part of the Phillip Morris (PMI) empire, the FIA and F1 deal with the issue.

"Mission Winnow is a PMI-driven initiative to demonstrate our commitment to continuous innovation and development of new solutions that can expedite positive change for society," says Mission Winnow.

"Inspired by the drive and dedication of our partners, it articulates how we are transforming our business through science and by adopting a new way of thinking and exploring every option."

Reacting to the claim that Mission Winnow is tobacco related and therefore its advertising should be banned, it insists: "The tobacco industry is a highly regulated space, and we always respect the laws that apply to our activities. This campaign is no different and respects all applicable laws, including those around the advertising and promotion of tobacco products, for example. The campaign does not advertise or promote any PMI-branded products.

"Since 2007, we have voluntarily removed all tobacco branding from the cars and bikes, even in countries where such branding was permitted," it adds.

To those who respond; if it isn't advertising, what's the point? The company responds: "The point is that we've learned from the past, and now we are using innovative science and technology to transform our business.

"We simply want to show the world what we are doing and how, with full transparency. We want to show people the change that is happening with PMI right now, a change that research, technology and innovation has made possible.

"This is not about advertising or promoting any PMI-branded products," it adds. "Mission Winnow is a campaign to demonstrate our commitment to continuous innovation and development of new solutions that can expedite positive change for society."