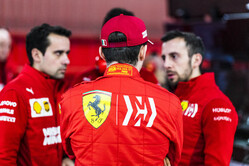 Enjoying the headlines having posted the first and third fastest times in pre-season testing, and beaten only by Mercedes in terms of mileage, behind the scenes the Italian team has quietly removed Mission Winnow from its official team name, the change of identity revealed on the latest official entry list from the FIA.

Originally, Ferrari went into the 2019 season as Scuderia Ferrari Mission Winnow, the name subtly reflecting sponsor Phillip Morris' expansion into the vaping market, a move which has seen McLaren controversially link up with British American Tobacco.

Though sponsored by Phillip Morris since the early 1990, the American tobacco giant's Marlboro brand having previously adorned the McLaren, since tobacco advertising was banned, despite the huge amount of money handed over to Ferrari each season, the company's presence was barely evident, though over the years a few none too subtle logo adaptions attempted to circumvent this.

Now however, with the advent of vaping, many fear that the tobacco giants are attempting to return to F1 through the back door, the Mission Winnow and BAT's 'A Better Tomorrow' campaigns widely regarded to be the opening salvo.

Ferrari hasn't issued a statement confirming the change to the team name - then again it never issues statements these days - and it remains to be seen if the Mission Winnow branding will appear on the SF90 and driver overalls in Australia, the branding having been all over the place during the Barcelona tests.