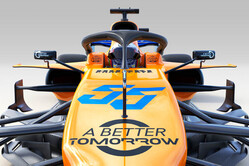 While Ferrari has dropped Mission Winnow as a result in the face of an investigation by the Australian authorities into its links with tobacco, McLaren has now followed suit in dropping the British American Tobacco inspired 'A Better Tomorrow' branding from its cars for the season opener.

Replacing the Better Tomorrow branding will be decals for the convenience store chain 7-Eleven, which is understood to be one of BAT's biggest customers.

Like Mission Winnow, the livery change is temporary, and A Better Tomorrow is likely to be back on the MCL34s in Bahrain in two weeks' time.

Both the Mission Winnow and Better Tomorrow campaigns, though described by their relative promoters as "potentially reduced risk products" are widely seen as an attempt to bring tobacco sponsorship back to the sport, albeit via the back door, over a decade after it was banned.

Ferrari revealed yesterday than instead of the Mission Winnow branding its cars will sport signage marking the 90th anniversary of the team's founding.

With a number of other countries on the F1 calendar, especially in Europe, just as strict on tobacco advertising, it is likely we will see both teams changing their liveries throughout the season.