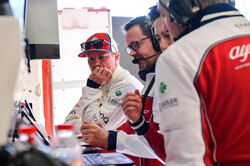 The clue is in the chassis; for while the Sauber name has disappeared from the F1 grid this year, the car now known as the Alfa Romeo is designated the C38, the 38th car from the Swiss team that first entered F1 in 1993 with the C12, the number following on from the team's series of legendary Sports Cars and the C in honour of founder Peter Sauber's wife, Christine.

Ignoring the fact that Sauber contested 465 Grands Prix between 1993 and last year, including several seasons as the BMW factory team, Kimi Raikkonen regards its 'successor' Alfa Romeo, which itself has a pretty good record in F1, particularly the early years, as a youngster.

I think they've been doing a good job the last year already, they're just growing up," said the Finn. It's a smaller team, we have less resources on everything but I think they've done a good job.

"It's a solid package," he said of the C38. "We have quite a few things to improve but we can go and give a fight, see what we get from there."

However, in the wake of pre-season testing which showed strong pace from the C38, the Finnish veteran was unwilling to confirm that the team could be challenging for best of the rest this season.

"Nothing is guaranteed, if we are fifth or 10th who knows," he said. "I think it's going to be quite close between the mid-pack and if do your job well you'll be higher up than on off-days when you don't do it well so we'll just do the best job we can and go for the first race. We'll give our best and see what we get in our first race and work from there.

"We're not one-hundred per cent where we want to be," he admitted, "but I think if you ask anybody they're going to say the same. There's nothing negative, obviously, we want to improve as anybody, there's always things to improve on the car, we don't know where we are and we'll find out very soon.

"Conditions are always different to race weekends because of the cold weather, and we didn't really push for the best lap time," he said, when asked his impressions of testing. "We tried different tyres and we have things to learn from them also. It was a bit tricky to get a lap time out of the softer tyres.

"We'll take what we learned here and go through them and see what warm weather, hopefully, in Australia changes."