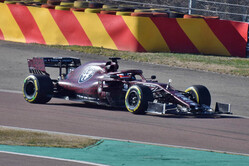 Not due to be formally unveiled until Monday, just before testing kicks-off, the Alfa Romeo has made its track debut at Fiorano this morning.

With Ferrari and Haas both scheduled for shakedowns at the track over the next couple of days, fans have made the trip to the Ferrari test track in order to see them before they make their debuts at Barcelona on Monday.

Being that today is St Valentine's day, the camouflage livery on the car featured black hearts and Alfa's famous cloverleaf (quadrifoglio) on a dark red background.

While Kimi Raikkonen was busy preparing for the shakedown, teammate Antonio Giovinazzi made his way to the airport to retrieve the final part needed for the team to assemble the car and head out onto the track.

The team subsequently completed a total of 33 laps, within the 100 kilometre limit, ahead of the upcoming test in Barcelona where Alfa Romeo will reveal the car and its race livery on Monday at 8.20 am (CET). 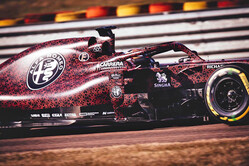 "We had a good session," said Raikkonen. "The car felt good and I was able to get a first impression of the car we will be running this season. We will work on the last few details and head to Barcelona for two weeks of testing. I look forward to getting to know the car better there."

"It was a positive day for us," added Frederic Vasseur. "We ran the 2019 car for the first time and were able to assess the progress we have made in our development ahead of the first tests in Barcelona next week. The whole team is pushing to start the season with the best possible base. Our drivers and crew are motivated, and we look forward to heading into the championship and delivering a strong performance."

"After a long winter we are happy to be on track with our new car for the first time," admitted technical director, Simone Resta. "The focus of our work today was on aerodynamic, set-up and cooling checks. We ran for a total of 33 laps and will use our data to establish how the new regulations will affect the behaviour of our car. The next two weeks which we will spend in Barcelona will be busy and will concentrate on proving the car’s reliability and performance."