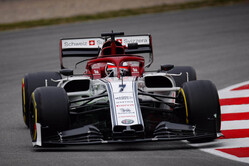 While attention focussed on testing this week, Alfa Romeo announced a number of new partners.

In the days leading up to the test in Barcelona, the Swiss-based team announced that the internationally acclaimed multi-industrial Singha Corporation had joined as official partner.

The Singha Corporation is a privately held company which since its founding has remained managed by the descendants of its founder, who in 1933 established Thailand's first brewery.

Over more than 85 years, the innovative project has grown to become one of the most recognised corporations around the globe, with the Singha brand making its way into various industries, including agriculture, real estate, retail fashion and lifestyle.

Then came Magneti Marelli, the leading manufacturer of systems and components for the automotive industry, with a strong presence in international motorsport.

The company will supply Alfa Romeo with their high-quality products which will be integrated in the team's cars this season.

Then came Adler, a leading company in the design, development and manufacturing of components for the automotive industry which was founded in Ottaviano, Italy, in 1956.

Adler has vast experience in the creation of systems for acoustic, thermal comfort and interior design for vehicles in the automotive, aerospace and railway industries, and has a presence in 21 countries.

And today comes news of IVECO, the manufacturer of vehicles, which has a strong presence in its industry around the globe.

The company will supply Alfa Romeo with trucks which will play a crucial role in the efficient and safe transportation of the race team's equipment throughout the upcoming season.

All this and Kimi...