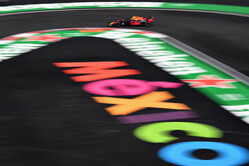 Yesterday, Romain Grosjean described the experience of running the hypersofts and the smooth, and very warm track surface, in Mexico City, as being like "driving in the wet".

Today he may well enjoy the experience for real.

The track remains a little damp following heavy overnight storms, with the prospect of further downpours today and tomorrow.

The altitude and aforementioned tyre issues led to a strange look to the timesheets yesterday, and while it's not that unusual to sees the Red Bulls at the top, it was surprising to see both Renaults ahead of the Ferrari and Mercedes, and even a Toro Rosso firmly in the mix.

While Ferrari particularly suffered with its tyres, Mercedes opted to turn the wick down on its engines, gearing overheating.

Consequently, what with the uncertain weather, overheating engines, ineffective tyres and everything else, we have all the ingredients for some fun and games today and possibly tomorrow.

As in Austin, the stewards are cracking down on track limits - and the exceeding of - drivers having been warned that four wheels off track at T11 will lead to repercussions.

While the upgrades on the Toro Rosso - available on to Hartley - appear to be working, Ferrari has opted to ditch the new floor it first tried in Austin.

Talking of Toro Rosso, for the second successive weekend Gasly has been demoted to the back of the grid after taking on a new engine and components.

Gasly is first out, followed by Ericsson, both on the Inters as the damp conditions have led to the session being declared wet.

More and more drivers head out, the Williams pair opting for full wets.

"Wet patches and quite a lot of dry patches," reports Gasly, "too dry for Inters." Meanwhile, Vandoorne is warned that the dampest part of the circuit is the pitlane.

Feedback from a number of drivers suggest the state of the track is in limbo, however, with temperatures being so cool there is no sun to dry the track.

The Finns, Raikkonen and Bottas, head out, both sporting Inters.

Hamilton heads out for an exploratory lap which is more about waving to the fans, while the Bulls, Toro Rossos and Panthers stay put.

Almost half an hour into the session, the crowd wait patiently as the teams continue to wait... but for what?

Eventually Alonso heads out, the McLaren sporting hypersofts. As ever, then Spaniard is keen to put on a show, willing to take a risk or two.

At the end of the lap the two-time world champion stay out, his rivals watch with keen interest. Crossing the line at 1:21.213 he's only just over 2s off his pace yesterday. "You don't hear this very often... we are P1, purple in every sector!" Alonso is told.

Gasly heads out to join the Spaniard, the Frenchman also running the pink-banded rubber. Raikkonen also heads out.

Gasly posts 25.395 as Vandoorne heads down the pitlane.

Raikkonen posts 20.785, which is the signal for a few more drivers to head out.

In the Haas garage, in among the black and grey clad Haas workers is a sole mechanic wearing a Ferrari shirt. Seemingly there's an issue with Magnussen's engine.

Sirotkin goes fourth and Sainz fifth, as Bottas and Vettel finally head out.

Bottas goes straight to the top of the timesheets with an 18.839, while Perez and Ocon go seventh and eighth.

No sooner has Leclerc deposed Bottas than Vettel posts 17.836 to go top. Moments later, Sainz bangs in an 18.386 to go second.

Verstappen and Ricciardo head out as Bottas looks set to improve. However, the Finn pulls to the side of the track at T15, a worrying puff of smoke rises from the rear. "Hydraulic failure," reports the driver.

The VSC is deployed as Bottas' car is removed from the track.

With the VSC having compromised his lap, Ricciardo is told to box, meanwhile, just before Bottas stopped, Verstappen managed to post a 17.918 which was good enough for second.

The VSC is withdrawn again with 10 minutes remaining.

Alonso improves to ninth with a 19.073 as Hamilton finally heads out. Along with Ricciardo and Magnussen, the Briton has yet to post a time.

Hartley goes tenth with a 19.140 as Leclerc goes quickest in S1. The Sauber driver loses pace in S2, but picks up again in the final sector, stopping the clock at 17.059. Teammate Ericsson goes fourth with an 18.012.

Moments later, Hulkenberg improves to sixth (17.623) but is demoted when Hamilton goes second with a 16.538.

Grosjean runs wide in T1 bringing out the yellow flags, which causes Ricciardo to abort his lap.

"Again, my battery is not charging," warns Verstappen.

Verstappen consolidates his top spot with a 16.284.