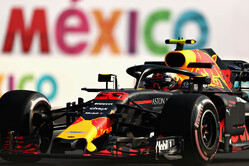 Having led Red Bull 1-2s in both of today's practice sessions, there was a late scare for Max Verstappen in FP2 when the Dutchman lost all power following a hydraulics failure.

Nonetheless, ahead of a weekend that the Austrian outfit hopes to be on a par with Mercedes and Ferrari, and indeed challenging for a double podium result, courtesy of the high altitude characteristics of Mexico City, the team appears unperturbed by the failure.

"It's a hydraulic issue of some sort," Christian Horner told Sky Sports, "so we need to get the car back to understand what's caused it.

"If it is an engine change, he's still got one in his pool, so he should be alright," he revealed. "But we need to get the car back first of all to understand it."

Asked about the team's performance, which saw it leave the Ferraris and Mercedes over a second in its wake, the Briton said: "What's happened here, as I said before the event, this high altitude tends to even things out a bit. The engines are struggling for air, the brakes, the cooling, everything is struggling for air mass through here.

"We're able to run the car in its optimum state and we've got a power unit that looks competitive relative to the others.

"They are for sure going to get their party modes going tomorrow," he said of Mercedes and Ferrari, "but the question is how much will it give them at this attitude.

"Last year we missed out on pole by one-tenth, it would be great to go one better, and if Max can do it he will be the youngest ever pole sitter."