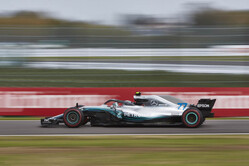 Wheel rims used by Mercedes, whose legality had been questioned by rival teams, have been given the green light by the stewards in Mexico.

The (rear) rims on the Silver Arrows feature a spacer which has grooves and holes aimed at reducing the heat flow across the rear axle.

However, rival teams have suggested that this, in contravention of the regulations which state that "any specific part of the car influencing its aerodynamic performance must remain immobile in relation to the sprung part of the car" - do indeed give an aerodynamic benefit.

With Mercedes, fearing a protest from rivals, calling on the Mexico City stewards to rule on the rims ahead of the race weekend, the stewards subsequently gave the controversial rims the green light.

The rims, which some claim have contributed to the German team's remarkable run of success in recent races, were cleared by the FIA - but not used - in Austin. However, fearing a protest from Ferrari this weekend, the Italian team having sought clarification on the rims in Japan, Mercedes called on the Mexico stewards for clarification.

To further muddy the waters, even though ultimately they were not used, Mercedes modified the rims in Austin.

While declining to make a "generalised interpretation" of the regulations, the stewards note that "the FIA's clarification and acceptance of the part specifically states that it is limited to the part presented by Mercedes in their submission to the FIA and that alternative design options would have to be considered separately".

However, they add that "Should Mercedes run the part as described in the correspondence between Mercedes and the FIA's technical department, the stewards would consider this part to be in conformity with the regulations, but only with respect to the points raised in Mercedes' request."

In terms of the FIA's stance regarding the legality of the holes in the spacer, the stewards note that "the fact the spacer rotates is inherent in its function, in much the same way that the wheel rim spokes rotate", which is why the sport's governing body found Mercedes approach "permissible".

However, they note that they "would reserve the right to judge alternative geometries, and to change this view if (for example) the spacer were to grow beyond its primary function and if the holes were to become big enough to have a more significant aerodynamic effect".

However, not only can the stewards decision be appealed, the ruling is made on a case-by-case basis and could therefore be raised again at either of the remaining races.

Due to the ongoing uncertainty it remains unclear whether Mercedes will actually run the rims this weekend.