Another penalty for Grosjean 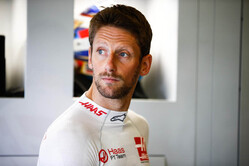 The pair were seen to collide during a frantic first lap at the Circuit of the Americas, the Haas sending the Sauber into a spin after colliding at T12.

The stewards, having reviewed the video evidence and heard from both drivers and their team representatives, deemed that the video showed that entering turn 12 Grosjean locked tyres and made contact with Leclerc.

As a result of the incident both cars suffered damage and while Grosjean retired after just 2 laps, Leclerc also retired, albeit 29 laps later.

The Stewards noted that Grosjean lifted and braked early because of the positions of the cars in front, but nevertheless made contact with Leclerc.

Handing the Frenchman a 3-place grid drop for next weekend's Mexican Grand Prix, a penalty point on his licence brings his 12-month total up to 10, just 2 short of a mandatory one-race ban.

Meanwhile Haas teammate, Kevin Magnussen, who finished ninth, is under investigation as his car consumed more than 105kg of fuel, from the time at which the signal to start the race was given to the time the car had crossed the line after the end-of-race signal had been given.

Also, under investigation is Esteban Ocon, who finished 8th, for an allegedly exceeding the fuel mass flow during lap 1.