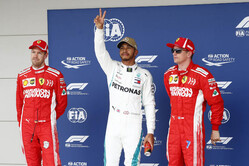 Q: Congratulations Lewis, another pole position. Take us through the lap. That was an important one wasn't it?
Lewis Hamilton: That was very important. How are you guys doing? You good? That was close. These guys have... I didn't know how close it was going to be once we got to qualifying, but once we got to the last run I knew it was quite edgy between us and that it was going to require solid laps. The first one was decent, but not good enough, and the second one was just that little better and enabled me to pull that out. You know there have been some races where I've not actually done a better time and I've had to bail out of the second lap, so I was very, very adamant that today I was going to do a better second lap, so I'm very happy with that.

Q: Just spitting rain a little bit, but any troubles out on track?
LH: No, the track has been incredible. It started out very, very green and slippery in practice three and then once we got into qualifying it was just rubbering in and it was getting faster and faster every session. The wind direction: there is a beautiful headwind going into the Esses. The Esses are just incredible; it's little bit like Maggots and Becketts. And also, there's such a big crowd here. We did a fan signing earlier and I've never seen the fans so hyped before, so it's great, but big thank you to the team and everyone here.

Q: Just very briefly: the supersofts - you had to do an extra lap, so your start tyres, are they OK?
LH: We'll see tomorrow. But the Ferraris are obviously really quick so... I just hope for better weather for everyone that's in the grandstands watching and I hope that it's an exciting race tomorrow.

Q: Thank you. Where is Sebastian? Sebastian, great lap, P2, through your Friday pain you'll start P5 of course. Take us through your qualifying session?
Sebastian Vettel: It was pretty close obviously. It's always a bit of a shame when you miss out on just that little time. I think with six hundredths you can always debate you had them somewhere in you. But I was pretty happy with the laps I had. I think it was quite tricky to get everything together. Obviously it's been dry today and better for us, but the wind was quite tricky for us but it's the same for everyone. Yeah, pretty happy. I think given the last couple of weeks that we had, pretty happy that we are back in range.

Q: Yeah, Ferrari are back on form aren't they it seems; you've found your pace again?
SV: Yeah, it seems that we are, obviously not in the wet but in the dry it seems that we are better off and I think today has been surprisingly close. I don't think we expected it to be that close, so that's good.

Q: Kimi, happy 39th birthday during the week, still plenty of speed there isn't there?
Kimi Raikkonen: Yeah, a little bit too slow, but I can deal with it. No, it's been a pretty positive day and for sure I think we got pretty close. It's far from ideal but I feel good with the car. We'll try tomorrow; it's going to be a long race, and nobody really knows how the tyre will survive, because of yesterday's rain, so it will be interesting.

Q: And of course you will start on the ultrasofts, unlike people around you?
KR: Yeah, not much to lose, so we'll try to make a good start and go from there and see what we can do. I think it should be OK.

Q: Lewis, your third pole position here at COTA - but an extremely tight battle with all three of you covered by less than a tenth of a second. Just how intense was that fight out there for you today?
LH: Clearly very intense. Naturally, going into qualifying, really wasn't sure what to expect - because basically, obviously, we were driving in the wet yesterday. And today, in practice, the Ferraris looked like they'd made some improvements, obviously. They've brought an upgrade of some sort and looks like they may have taken it off. But otherwise, anyways, we were very, very close. So, I knew it was going to take perfection and very, very neat laps to outpace them. I think James had told me, our strategist had told us it was very, very close between us all so give it everything. And I think Q1 and Q2 was fairly straightforward for us - but then once we got to Q3 it was just really about maximising, making sure on the track at the right time and not leaving a millesecond on the track. The first lap was good but obviously quite close between us all. I knew, being that I was less than a tenth, I think it was, ahead, I knew that the next lap, these guys would improve also. So, there was no room for error. And considering there's been some qualifying Q3s in the past races where I've had to bail out of the second one because it wasn't good enough, so I was very, very strict with myself today. I was like 'today, you have to make sure you pull through on that second lap', which I'm so grateful I did. Nonetheless, the team have done really great job this weekend. I think the approach for us has been very sturdy and we've not been getting ahead of ourselves. We knew that this weekend it was going to be close, and that we have to do the same due diligence and same work effort and workload as before, and yeah, this a great result. I'm so happy. It was a different feeling today, coming in. I don't know why. I don't know if I slept longer or not. I was in a different headspace going into qualifying, which is weird but it was a good one.

Q: Sebastian, Lewis is talking about how fine the margins were today. Do you feel that gap was out there anywhere, or can you not pinpoint where the gap is between the two of you?
SV: I think if it's less than a tenth, you always think probably there was a little bit left but I was pretty happy with the laps I had, to be honest and I think overall it's been a positive surprise, I guess for both of us, to see how competitive we've been today, given how far we've been behind the last events. So, I think there's probably more positives - but yeah, if you're that close, you want to be ahead, not behind.

Q: Kimi, similar question to Sebastian really, with the gaps so close. Were you happy with your run, or do you feel you left anything out there?
KR: I think if you do a few more tries then for sure that amount you can improve. It's just a very small difference somewhere, and you could be suddenly that much quicker - but this is what we got today. I think the last run was pretty good but the previous had very little grip, so then I was surprised how much on the last run I had, so obviously, when you have a bit more consistent grip it's more easy to know how much you can actually push - but yeah, it was OK.

Q: (Scott Mitchell - Autosport) Question for Sebastian. You talked about it being a positive surprise after the last few races. Why do you think you've been able to make that step? Is it an understanding of what happened before? Do you think maybe the cooler conditions helped? And is there in any way an element of frustration to be so close to pole and obviously know that you've got the three-place penalty applied?
SV: Well, I can't change that now. Obviously, it is what it is. We went back with our car quite a long way, and it seems to work better that way.

Q: (Peter Windsor - Peterwindsor.com) Lewis, congratulations. You used the word 'perfection' there. I'm interesting to know from your perspective whether that was the perfect lap? I don't think you were purple in [sector] one but I wonder if that was a function of perfectly using the tyres for the lap?
LH: No, it wasn't a perfect lap. You know I never talk about perfect laps. Naturally, I think that's what we're all striving to achieve but it's just... there's so many parameters out there. You get out there and there's different gusts of wind every time you hit a corner. Tyre temperature differences. You know. A different heartbeat on the different bumps. There's so many different variables and you're really just on your tippy-toes the whole way, trying to catch it and grab it and utilise the grip. But anyway, for me, no, I think the first section, for some reason they're particularly quick there. I think some of that was probably in Turn One, mostly. They generally have a car that's better in corners like that. But then the rest of the lap was good. There was no mistakes. The first lap was quite good - but there was a little bit of time loss I think maybe, in the exit of... in a couple of corners. Turn 11, Turn 12. Maybe 13 and a little bit in 20 - but that second one, I was obviously able to capitalise and make sure I didn't drop the ball. So, I mean, it was a good lap but for me the highest one I have still is Singapore. But, I tell you, this track is incredible this year. It's taken another step for us. That first section, we're flat-out through Turn Two - which is easy - then Three, Four, Five, all the way into Six, and you're pretty much flat all the way into Six and halfway through Six. So the G-Force that you're pulling through there is incredible. And then you don't really have much of a lift, or much of a lift for Seven. And then you're braking down, and because there's a headwind coming from Turn 11, which hits you dead on into Eight, the cars hooked-up through there and it's really fantastic to drive. So I really enjoyed today's lap.