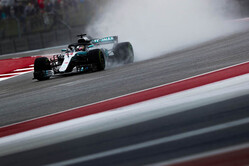 Rain was the main feature of free practice in Austin, with the intermediates mainly used in FP1 and also full wets in FP2. Although all 20 cars set a lap time in FP1, with more than 250 laps covered, there was less running in FP2, with only 15 drivers setting a time in the rain. In FP1, Mercedes driver Lewis Hamilton set the fastest time of the day, a full 1.3 seconds faster than his team mate Valtteri Bottas.

Similar conditions are expected tomorrow, with the teams mostly choosing to keep their allocation of full wet tyres in case they are needed throughout qualifying. However, Sunday's race is expected to be run in dry conditions - meaning that the teams will probably be lacking data for a grand prix on the slick compounds.

Mario Isola: "There wasn't so much that could be done in today's conditions, although we did see quite a lot of running in the morning using the intermediate tyre. In wet conditions, the teams receive an extra set of intermediates, bringing their total allocation for the weekend up to five sets of intermediates and three sets of full wets. These full wets could be needed tomorrow, when more rain is expected for qualifying before a dry race on Sunday. This should obviously lead to an interesting situation in the race, with the teams lacking slick tyre data. Understandably, in today's slippery conditions the teams preferred not to take any risks with the cars, although they were able to understand more about the crossover point from wet to intermediate."