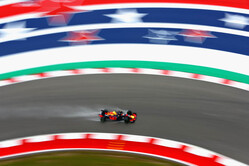 Lewis Hamilton topped the timesheets in this morning's session, a session compromised by heavy rain earlier which had left the track wet and no sun to help dry it.

However, despite the fact that tyres are limited and further rain is expected today and tomorrow, there was a lot more running than anticipated.

Hamilton's title rival, Sebastian Vettel, was fifth quickest, 1.987s off the pace, but the German might have another problem on his hands after being summoned by the stewards for not slowing sufficiently when the session was red flagged in order to clear stones left on the track after Charles Leclerc went wide.

Though the championship is already more or less decided, do we really want Vettel's hopes finally killed off by a grid penalty?

In the moments before the start of the session, Race Control helpfully advises that the risk of rain is 90%, though the less technical might point out that it is already p****** down.

Having handed their cars over to their teams' respective reserve drivers earlier, Brendon Hartley and Stoffel Vandoorne are in action this afternoon. Like his teammate, the kiwi is facing a grid penalty after Honda opted to change the engines in both cars.

In the moments before the session is due to start the Safety Car heads out to check the track conditions. Clearly all is considered OK, for the pitlane lights go green at 14:00 as scheduled.

Of course, whether we see any running at this point remains to be seen. Fact is however, it is very wet, and with Mexico only a week away nobody will want to take any unnecessary chances.

In the Red Bull garage, there's action... in the form of Karaoke... we kid you not.

Almost thirty minutes in and not only has the rain increased in intensity, visibility is poor also.

In the Toro Rosso garage, Hartley offers false hope when he starts to put his helmet on. However, the camera pulls away, and several minutes later it becomes clear that the kiwi wasn't actually going anywhere.

That said, with 42:30 remaining, the kiwi does indeed fire up the Honda and head out.

"Obviously very wet, but no standing water," reports the Toro Rosso driver who stays out for a second lap. He is joined by Vandoorne, who also missed out on FP1.

Raikkonen is the third driver to head out, like his predecessors he is on full wets.

Having improved to 57.109, Hartley warns of understeer and that his rear tyres are getting very hot.

As Raikkonen pits, the Williams pair head out to join Hartley, who is now down to 55.370.

Sirotkin posts 55.446 and Stroll 55.713 as the Sauber pair head out... clearly the rain is inspiring thoughts of Noah in the pitlane.

"We could look at it," replies Hartley when he's asked if he wants to switch to Inters, the Toro Rosso driver having got down to 55.163 over the course of his 9 laps.

As Hartley improves to 54.559, teammate Gasly heads out, the Frenchman on the full wets.

With 18:35 remaining, just the two Toro Rosso cars are on track.

Sirotkin bolts on a set of Inters and heads out with just over 16 minutes remaining.

Hesitant about switching to Inters, Hartley is warned that he's running out of time.

As Gasly improves to 52.751, on those Inters Sirotkin is clearly struggling. Indeed, the Russian fails to improve on his time set on wets.

Despite this, Vandoorne heads out on Inters. The McLaren driver is followed by Vettel and Hulkenberg, both on Inters.

As Raikkonen heads out on Inters, on-board with Vettel reveals that the green-banded tyres are not fully working, certainly for the Ferrari.

That said, Verstappen and Hamilton head out on Inters.

Hulkenberg goes quickest with a 52.208 but Gasly is on a hot lap and moments later raises the benchmark with a 50.199.

As Hamilton goes quickest in S1, radio replay reveals that the Briton wasn't too happy about going out, feeling that he wouldn't learn anything.

"These tyres are not great," reports Vettel.

Quickest in all three sectors, Hamilton raises the bar with a 48.716. Goodnight ladies.

As more drivers head out it is clear we won't be seeing Ricciardo, the Australian's car up on its stand and almost fully stripped down.

Alonso goes fourth with a 51.728, ahead of Hulkenberg, Hartley and Ericsson.

Told to go steady into his box, Hamilton replies: "You know, when you tell me to go steady I'm not going to go steady." "Yeh, a leopard never changes his spots!" replies his engineer, Bono.

Leclerc is eleventh, ahead of Stroll, Perez, Ocon and Sirotkin, while Bottas, Ricciardo, Sainz, Grosjean and Magnussen didn't post a time.