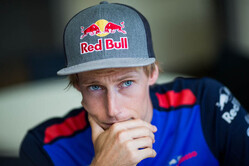 Having discovered a number of issues following the introduction of its latest power unit at Suzuka, the subsequent changes mean that both Pierre Gasly and Brendon Hartley will incur grid penalties for this weekend's United States Grand Prix.

"On both cars, the new units will feature minor modifications to the specification when compared to that used in the Japanese GP," said Honda technical director, Toyoharu Tanabe.

"After examining the power units used in Suzuka, we had some concerns," he admitted, "so we have decided to make these changes, which we believe is the best strategy for Scuderia Toro Rosso for the remaining races of the season."

Gasly used his new power unit in today's opening session, while Hartley's will be fitted in time for FP3 tomorrow.

Taking on a new ICE, his seventh of the season, Turbocharger (his 7th), MGU-H (7th) and MGU-K (6th) Gasly will head to the back of the grid, while it is not yet clear which other components Hartley will take on.

Honda introduced its latest-spec engine at Sochi, where both drivers took grid penalties, but then held the units back so they could make their debut at the Japanese manufacturer's home race.

While the pair qualified sixth and seventh at Suzuka, largely the result of the lottery that was Q3, neither finished in the points.